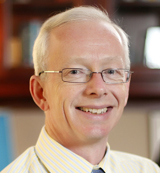 Donald Brady is a board-certified general internist, a fellow in the American Academy on Communication in Healthcare, and Chair of the Association of American Medical Colleges (AAMC) Group on Resident Affairs Steering Committee. He graduated from Vanderbilt University School of Medicine, where he also did his residency in internal medicine at Vanderbilt University. Upon finishing his residency training in 1993, Dr. Brady moved to Atlanta, where he served on the faculty at Emory University School of Medicine. While at Emory, he helped establish the primary care track in the internal medicine residency program, serving as its director for a decade and from 1999-2007, and was the co-director of the J Willis Hurst Internal Medicine Residency Program. Dr. Brady returned to Vanderbilt in October 2007 to assume the role of Associate Dean for Graduate Medical Education and Designated Institutional Official. In 2013, he was promoted to Senior Associate Dean for GME and Continuing Professional Development, in recognition of the close linkage between house staff training and ongoing professional development of clinical faculty. Not only does he enjoy his administrative roles, but he also values the time he spends as a general internist on the ward service at Vanderbilt University Hospital. Dr. Brady’s main interests are in medical education, doctor-patient communication, and physician wellness. He has consulted with several universities to review their GME training programs. In 2010, he was invited by ACGME International (ACGME-I) to serve as an institutional site visitor for mock accreditation reviews in the Republic of Singapore, as it and its institutions became the first non-US residency programs accredited by the ACGME-I. He has received numerous teaching awards, including being named the Clinician-Educator of the Year by the Southern Society of General Internal Medicine in 2002. He currently serves as the Chair of the Board of Directors for the American Academy on Communication in Healthcare, is Past Chair of the Faculty Senate at Vanderbilt University, and served formerly as the Chair of the Board of Regional Leaders for the Society of General Internal Medicine. He has presented numerous medical education workshops at national meetings, including for the ACGME, AAMC, Society of General Internal Medicine, and the Association of Program Directors of Internal Medicine, to name a few.