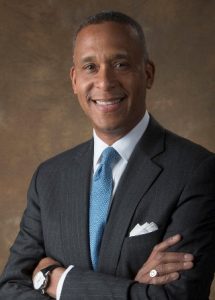 Wayne J. Riley, M.D., MPH, MBA, MACP, was appointed President of The State University of New York (SUNY) Board of Trustees as the 17th president of SUNY Downstate Medical Center in January of 2017. Downstate is the only academic medical center in Brooklyn and one of four academic health centers in SUNY’s 64-campus system.

Dr. Riley earned his Doctor of Medicine degree from the Morehouse School of Medicine, a Bachelor of Arts degree in anthropology with a concentration in Medical Anthropology from Yale University, and a Master of Public Health degree in health systems management from the Tulane University School of Public Health and Tropical Medicine. He also earned a Master’s in Business Administration from Rice University’s Jesse H. Jones Graduate School of Business. Dr. Riley completed his residency training in internal medicine at Baylor College of Medicine in Houston, Texas where he rose from instructor of medicine to vice president and vice dean for Health Affairs and Governmental Relations. He also held an associate professorship of Internal Medicine.

Dr. Riley is immediate past president and president emeritus of the American College of Physicians (ACP). He has served as chair of the prestigious National Academy of Medicine of the National Academy of Sciences as an elected member of the Administration of Health Services, Education, and Research, and is recognized as a master of ACP. Dr. Riley also served as a member and secretary treasurer of the Society of Medical Administrators, a member of the American Clinical and Climatological Association, and as a member of the Sullivan Alliance to Diversify the Health Professions.

A Brooklyn resident, Dr. Riley currently serves on the boards of the Bedford Stuyvesant Restoration Corporation, the YMCA of Greater New York, and the Arnold P. Gold Foundation. 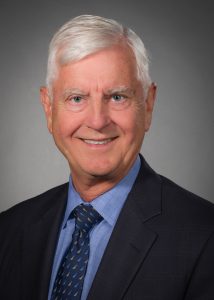 As physician-in-chief, Lawrence Smith, MD, MACP, is Northwell Health’s senior physician on all clinical issues. He previously served as Northwell’s chief medical officer. Dr. Smith is the founding dean of the Zucker School of Medicine, which received full accreditation by the Liaison Committee on Medical Education and whose first class graduated in May 2015.

Dr. Smith has held senior leadership positions in national societies for medical education and residency training, authored numerous peer-reviewed publications in the area of medical education and has received many awards and honors from national and international organizations. He is a member of the Board of Visitors of Fordham College. In 2011, he was elected to Mastership of the American College of Physicians. Dr. Smith was inducted into the Gold Humanism Honor Society in 2014, invited to join the Arnold P. Gold Foundation Board of Trustees in 2017 and made chair of the Gold Foundation’s Program Committee in 2018. Dr. Smith serves on the Executive Committee and as treasurer for the Associated Medical Schools of New York. He serves as chair of the National Academy of Sciences Roundtable on Health Literacy and is a member of the NYS Board of Education Advisory Committee on Long-Term Clinical Clerkships and on the University of Rochester’s Board of Trustees Advisory Council. He is a former regent of the American College of Physicians, former member-at-large of the National Board of Medical Examiners and a former member of the board of directors of the American Board of Internal Medicine.

Dr. Smith earned a Bachelor of Science in physics from Fordham University and a medical degree from New York University School of Medicine. His residency in internal medicine at Strong Memorial Hospital was followed by military service as a captain in the Army Medical Corps at Fitzsimmons Army Medical Center in Denver.

This session is sponsored by

Leo, the powerful healthcare education platform from DaVinci Education, helps deliver insights that drive improved outcomes for students, faculty, staff and leadership in the health sciences. With Leo and DaVinci Education, you can be accreditation-ready, always.