On June 9, 2022, The Arnold P. Gold Foundation hosted its Annual Gala, welcoming hundreds of supporters of humanism in healthcare to the Ziegfeld Ballroom in New York City.  It was an evening of celebration, one that recognized extraordinary leaders and milestone anniversaries of the Gold Humanism Honor Society and the Gold Corporate Council. 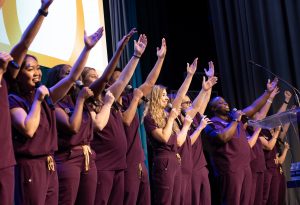 The gala began with a magical scene, as a dozen nurses in scrubs took the stage and began to sing. This was the Northwell Health Nurse Choir, an inspirational group that came together during the early days of the pandemic to share songs of hope and perseverance. They have graced the stages of Carnegie Hall, The White House, and America’s Got Talent—and now the Gold Foundation’s Gala.

The ceremony was hosted by Gold Foundation President and CEO Dr. Richard I. Levin and Gold Trustee Dr. Kimberly Manning, who are both remarkable voices for humanism, equity, and justice in medicine.

“What was once ordinary has become absolutely extraordinary,” said Dr. Manning. “And us getting to be together in this room, in this not quite post-pandemic period that we’re in, feels both exhilarating and poignant.”

“Since we last met in person, the world seems so very changed,” observed Dr. Levin. “The past two years have highlighted the very best of humanity – heroes in our nation’s medical centers and pharmaceutical laboratories, heroes in healthcare innovation, heroes in our communities.” 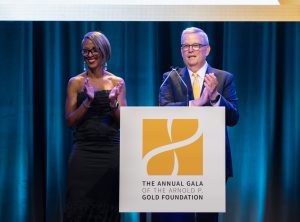 Dr. Kimberly Manning and Dr. Richard I. Levin welcome the audience to the 2022 Gold Foundation Gala.

He noted that many of these heroes were present at the gala, giving the room an incredible “burst of energy.” The event was the Gold Foundation’s first hybrid gala, allowing more supporters to watch and celebrate from the comfort of their homes.

“I want the stories to tell themselves tonight,” said Dr. Levin. “The story of the foundation, the story of 20 years of the Gold Humanism Honor Society, the story of leaders from the corporate sector who care deeply about the consumers they serve, and of course the stories of the individuals we are honoring tonight.”

The recognition of these individuals with the National Humanism in Medicine Medal was a particular highlight of the evening. This year’s medal honorees were bestselling author and GHHS member Dr. Michele Harper; Bellevue Literary Review Editor-in-Chief and acclaimed physician-author Dr. Danielle Ofri; nurse leader and international anti-human trafficking activist Deb O’Hara-Rusckowski; and global business and healthcare leader and Chairman, CEO and President of Quest Diagnostics, Steve Rusckowski. Ten dynamic Gold Humanism Honor Society (GHHS) leaders also received the medal for their contributions to the honor society over its two decades.

In their acceptance speeches, the honorees offered insights into how they keep humanism at the heart of their lives and careers.

Dr. Danielle Ofri reflected on the beginnings of the Bellevue Literary Review, the first literary journal to arise from a medical setting. “It dawned on us that there was a universal concern, fear, and interest in health and healing,” said Dr. Ofri. “We realized we had touched a nerve.” The journal recently celebrated its 20th anniversary.

Beginning in 2002 with three inaugural chapters, GHHS is now nearly 45,000 members and 181 chapters strong.  GHHS membership recognizes medical students and physicians who are role models of optimal, humanistic care. Members are expected to be active leaders in medicine and uphold this Gold standard of care in their connections with patients and colleagues. 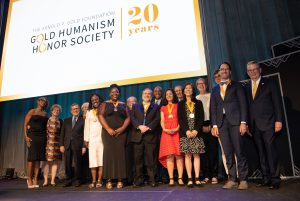 GHHS members receive the National Humanism in Medicine Medal for helping to power the success of GHHS over its remarkable 20 years.

Ten GHHS leaders were recognized on stage as medal recipients, while other members who were nominated to represent their chapters were highlighted in the gala’s digital journal.

Dr. Michele Harper, elected to the honor society as a medical student, accepted her medal on behalf of all GHHS honorees. “I consider recognition for humanism in medicine to be one of the highest commendations in the field,” said Dr. Harper. “It is heart-lifting for us all, which is especially lovely because it occurs at a time when there is a heavy urgency to act.”

Mrs. O’Hara-Rusckowski spoke about her enduring efforts to keep humanism not only at the forefront of patient care, but central to her anti-human trafficking work. “How do we instill a common moral fiber of compassion and humanism into people?” she asked. “I do believe one common denominator must be part of the solution: authentic love. Because if love doesn’t win over, the opposite will.”

The 5th anniversary of the Gold Corporate Council was the second milestone celebrated at the gala. The GCC represents some of the world’s foremost healthcare companies who have committed to enacting humanistic policies in their own organizations. Their unique partnership with the Gold Foundation is aimed at elevating humanism and effecting real change across the healthcare ecosystem. Of this partnership, Dr. Levin noted, “The true impact is just beginning.”

Honoree Steve Rusckowski, the ignitor and founder of the Gold Corporate Council, brought a unique perspective from his years as a visionary business leader. “How does technology affect the humanity of medicine and the patient experience?” he said. “Well, if you’re thinking about the journey of the patient, and how they’re affected by many more touchpoints that influence their impression of the caring and healing environment that healthcare is striving for, you can understand its effect.”

The special evening closed out, as it began, with a song. The Northwell Health Nurse Choir took the stage once again, with a rousing rendition of “Don’t Give Up on Me.” In their joyful voices, the hope that has sustained so many over these past few difficult years rang clear and true.

Visit the 2022 Annual Gala page, where you can view the photo gallery, digital journal, and video of the event.

As part of the 2022 Annual Gala and the 20th anniversary of the Gold Humanism Honor Society, the Gold Foundation invited each GHHS chapter to recognize one person who was … chevron_right Read more