Gold Foundation Board member Elaine Adler was awarded the 2019 National Humanism in Medicine Medal on June 13, 2019, at the Golden Thread Gala in New York City. These are her acceptance remarks, which played on a video at the gala. Watch that video here.

Hello, everyone. I am so very sorry that I cannot be with you, in the room today, on this special evening. I always wanted to be a movie star, so thank you for putting me on the big screen tonight.

Unfortunately, my granddaughter is having an event tonight at the same hour. She wants and expects me to be at her graduation. I know all of you appreciate the importance of the family connection, and so I’m sure you understand.

The Gold Foundation has been an important part of my life for more than 20 years, thanks to my extraordinary friends, Arnold and Sandra. They knew that people who are ill need more than a pill. They need a lot of TLC to go with it.

Because of our friendship, I learned about the foundation and “got hooked.” I realized how important the philosophy of humanism is, especially in healthcare, and so I took up the cause. 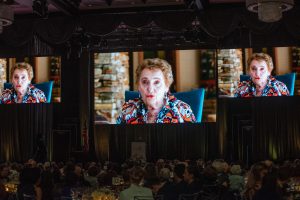 Elaine Adler, speaking on screen at the 2019 Golden Thread Gala

While doctors are wonderful, but it’s the nurse who really takes care of the patient hour after hour, day after day. This came to life for me when my husband, Mike, became so ill that I could not take care of him by myself. Not knowing where to go, I got a recommendation from a friend and certainly “lucked out.” Val became Mike’s aide. He and Mike bonded quickly, and he took special TLC care of Mike until he passed away. It was a difficult time.

I don’t know what I would have done without Val. I realize that more young men should go into nursing. It is a wonderful profession.

When the Gold Foundation told me their idea to expand the White Coat Ceremony to nurses, I thought it would be wonderful, and I was very happy to be able to assist to bringing it to a reality.

We hired a researcher to learn what was being done in the world of aphasia and so we met a wonderful woman, Audrey Holland, who became our mentor.

When taught to speak again, he said to me, “we have to help those who are not as fortunate as we.” And so, we began the Adler Aphasia Center in Maywood. This is Mike’s legacy.

Today, we’ve grown the number of centers to three, going onto our fourth, any day now. I expect to open one in Florida in the near future, which would make it number five.

There’s more than hope. We have success. People can make themselves understood. Not always by speech but by body language. So now they are no longer alone in this terrible plight.

The human connection is so important. This is where the Gold Foundation comes in. It emphasizes compassion and therefore reduces the stress of the situation.

I’m grateful to those who have been so kind and generous and who are honoring me tonight. But I miss not being with my co-honorees: Dr. George Thibault, with whom I sit on the Board, and Anna Quindlen, who doesn’t know it, but through the years, I have read her writings and was thrilled to think that I would be at the same table as she. Maybe one day soon we’ll go to dinner. I hope so because I really do admire her.

But it is really the Gold Foundation and their work that should get all the accolades.

Their work of infusing humanism into healthcare makes the real difference.

Thank you again. I am so pleased to be honored.

Let us help ensure that the Gold Foundation continues its important work for at least another 30 years, and then plus, plus, plus. Thank you again.