As our nation celebrates Americans of all ages who have served in our armed forces, the Gold Humanism Honor Society (GHHS) of The Arnold P. Gold Foundation is launching a national program to support veterans. The overarching purpose of the new Veterans Gold Health Initiative is to encourage community and academic clinicians in all specialties to more effectively identify, diagnose and treat America’s veterans. 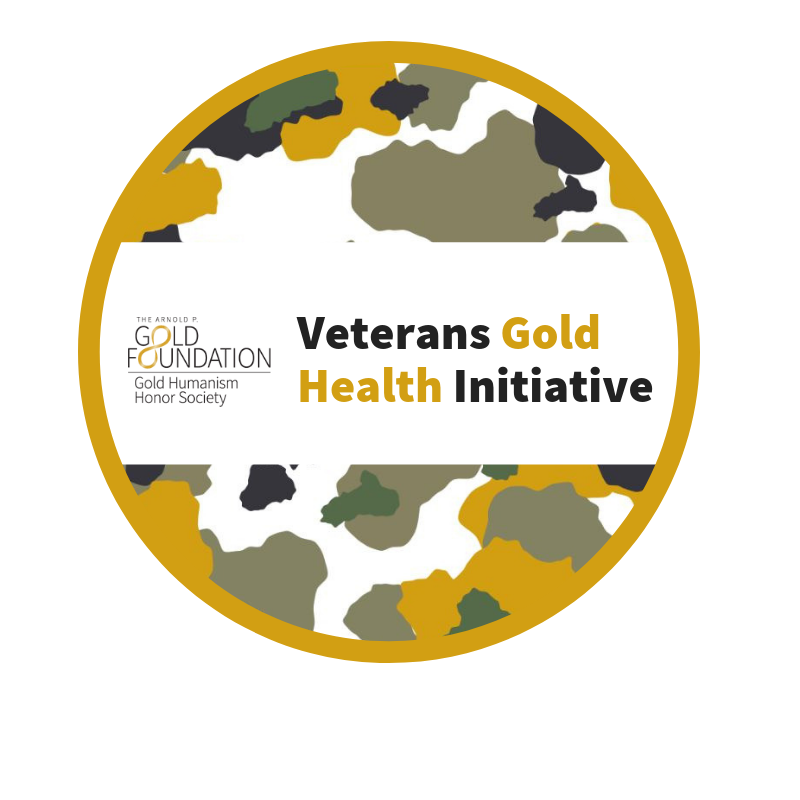 The initiative was inspired by the work of Dr. Jeffrey L. Brown, who is a pediatrician and mentor of GHHS Director Dr. Dorothy Levine, who is also a pediatrician. Dr. Brown served as a combat infantry battalion surgeon in Vietnam.

Years after his military service was over, he noticed a widespread problem – that civilian doctors and nurses often had insufficient training to identify risk factors in their veteran patient population, and often failed to identify the veteran status of patients at all. Dr. Brown began to develop materials to educate civilian doctors and nurses in taking a proactive role in identification and assessment.

There are about 20 million veterans in America, according to the Department of Veterans Affairs, and fewer than 50 percent of eligible veterans receive their care through Veterans Affairs (VA) facilities.

In 2012, Dr. Brown wrote a landmark editorial in JAMA, “The Unasked Question,” which highlighted the need for asking whether a patient has ever served in the military and urged medical schools to teach their students how and why to take a military health history.

“The public health implications are important: Large numbers of veterans who might have sequelae from their military service are receiving medical care from civilian physicians who have no awareness that they are veterans,” he wrote in JAMA. “The 63-year-old man who presents with multiple myeloma and Parkinson disease, the 41-year-old woman with chronic fatigue and myalgia, and the 30-year-old patient with memory loss and panic attacks might all have symptoms related to deployments in Vietnam, Iraq, or Afghanistan. And because no one ever asked if they served in the military, no one would know that their symptoms might be service related.”

Veterans are at increased risk for mental health conditions, post-traumatic stress disorder (PTSD), and traumatic brain injury compared to civilians. Veterans are estimated to make up 22% of suicides, according to a report by the Department of Veterans Affairs’ Suicide Prevention Program, despite being less than 10% of the U.S. population. Healthcare professionals need to be aware of patients’ military backgrounds in order to recognize suicide-risk factors and tend to their particular needs, which may include physical, mental or emotional scarring.

“Dr. Brown’s work to create real change in the identification and specialized care of veterans in recent years has included partnering with national medical and nursing organizations. The first to design a local educational change were the medical students at Sydney Kimmel Medical College at Thomas Jefferson University.  Our hats are off to them, and we have decided it is time to amplify the efforts of improvement through unleashing the creativity of our medical student GHHS network of over 150 chapters,” said Dr. Levine.

The new Veterans Gold Health Initiative officially kicks off on November 12, 2018, Veterans Day. Each chapter is encouraged to answer this call in creative ways that address its particular patient population and fit with its medical school and associated medical centers.

Participants can share their efforts around this initiative and request free “Veterans Gold Health Initiative” stickers through this online form. As projects are developed, they will be shared on the Gold Foundation website. Other supporters of humanism are welcome to join in this effort and share their impact with the Gold Foundation.

Learn more about the Veterans Gold Health Initiative and share your plans with us.

“Solicitude benefits both the patient and the clinician. In essence, sensitivity is gentle armor, a sign of strength and a precursor to empathy.” ­- Dr. Martina Ann Kelly The Gold … chevron_right Read more

The Arnold P. Gold Foundation is pleased to announce the six winners of the 2022 Hope Babette Tang Humanism in Healthcare Essay Contest: three by medical students and three by … chevron_right Read more