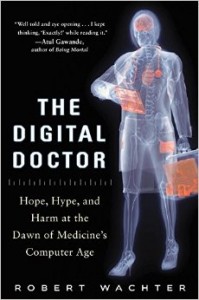 Few would doubt that the incorporation of modern technology into medical care has been “strewn with land mines, large and small.”  In The Digital Doctor, Robert Wachter shows us the ways in which our modern healthcare system has changed with the addition of new technology and offers insight into the future of healthcare.

Written in a thoughtful, yet entertaining and almost conversational, style, The Digital Doctor is a worthwhile and important read for new and experienced healthcare professionals, as well as for anyone who views the future of medical care with concern, excitement, or a mixture of both.

The problem, Wachter writes, is that, “Medicine is at once an enormous business and an exquisitely human endeavor…it is about science, but also about art; it is eminently quantifiable and yet stubbornly not.”   He effectively balances the hope, hype and harm associated with his topic by interviewing experts from all perspectives– including doctors such as Abraham Verghese, important players in Silicon Valley such as technology optimist Vinod Khosla, and patients– all who interact with medical technology in an entirely different way.

The book opens with an exhaustively comprehensive background of the politics behind recent legislature that has affected the ways hospitals use technology, as well as a historical section which serves to remind us that today’s concerns about technology in medicine are nothing new.  Although this political discussion is certainly important for placing the current state of healthcare into context, the politics section is a whirlwind and may be confusing for anyone without a background in this area, due to the sheer volume of names and decisions described.

Wachter draws comparisons to other fields outside of medicine, particularly aviation.  Aviation experts have managed to effectively deal with many issues that still present a thorny issue for doctors.  For example, commercial pilots now have a clear and well-organized alert system in place to eliminate inefficient alerts and avoid “alarm fatigue,” while doctors are faced with a cacophony of alarms every day.  Many of the alarms doctors hear on a daily basis are insignificant or accidentally triggered when no emergency is present, but ignoring the wrong alarm could result in the death of a patient.

The harm associated with medical technology is perhaps easier to pinpoint than the hope.  Negative effects of computerization are immediate and dangerous.  Central to the book is the story of 16-year-old boy who was prescribed a common antibiotic, but mistakenly given a 39-fold overdose that nearly killed him.  To explain how such an incredible error could have occurred, Wachter takes us through the interface between human and technology at each step: from the doctor who prescribed and confirmed the medication (with a tiny error in the unit), to the robot in the pharmacy that filled the order, to the nurse who administered the overdose.

Without placing blame on any of the parties involved, Wachter describes the “Swiss cheese model of error”: in a system where each step is designed to be a check on the last, all of the “holes” aligned in exactly such a way that nobody caught the error.

“While someday the computerization of medicine will surely be that long-awaited ‘disruptive innovation,’ today it’s often just plain disruptive.”  But Wachter believes we are headed in the right direction. Though careful to balance the hope and the harm, Wachter ends the book with a hopeful depiction of the ideal picture of integrated technology in the hospital of the future.