Robert Frost wrote that the greatest metaphor “is the philosophical attempt to say matter in terms of spirit, or spirit in terms of matter, to make the final unity. That is the greatest attempt that ever failed.”  Rafael Campo has made that unity his project from his first book, What the Body Told (1996), to his beautiful sixth collection, Alternative Medicine.  In the poem “Primary Care” the speaker pleads:

Body, please,
repair yourself once more, bleed and stink,
decay again until, beneath your fragile skin
I see the outlines of the soul you shield.

Everywhere in this formally agile and diverse book, the aspiration to unify matter and spirit underlies poems about the American body politic, the body under siege by disease, the body united with a loved other:

It could be said that we are also made
of empty space, interstices of cells,
and deeper still, the yawning chasms where
electrons buzz beyond their proton pairs.
Such distances dissolve when we make love. . .

All poets try to marry the seen and the unseen, heard and unheard, and—in this time when neuroscientific thinking prevails—the self as mind and the self as brain function.  One quality that singles out Campo’s approach involves his amalgam of personal and public identities:  as a gay man; as a Cuban-American; and, especially, as a doctor who knows quite literally on his pulses that the body is the seat of felt life:  “Assessing the edema,/I leave the imprint of my fingertips/anywhere I press down on his taut skin.”

A corollary—and equally abiding—theme of Campo’s is empathy, both its capacities and its limitations.  No contemporary poet has brought us more fully into the social world of the medical clinic, or imagined more piercingly the human condition as both hospital and, ultimately, hospice. The doctor’s helplessness in face of mortality mirrors humanity’s defenselessness before inhuman acts it must acknowledge as its own:  “Unluckily, the day begins:  a bomb/has detonated in Mumbai.  Again,/we ask ourselves:  Is this what we’ve become?” he wonders in the cannily titled “My Kind of Love Poem.”  One of the strongest of the book’s four linked sequences, “Pharmacopeia for the New Millennia” enacts a poignant form of wish-fulfillment, prescribing a regimen of drugs for over-abstemiousness, a defective social conscience, apathy to the facts of climate change, addiction to social media, and deficiency of compassion.

No review of Campo’s work can fail to note his formal dexterity.  Alternative Medicine contains sonnets taut as drum skins, stanzas you can bounce a quarter on, blank verse colloquial as good talk, villanelles, sestinas, and—especially impressive—Campo’s own variations on those demanding forms.

A personal favorite of mine is “Heart Grow Fonder.”   Here, Campo “samples” bits of popular rhymes and songs, literary allusions to T.S. Eliot and Emily Dickinson, and an insistent villanelle-like refrain to construct a mordant but understated medley, poignantly registering the personal vulnerabilities that undermine yet fortify compassion:

The breastbone’s connected to the rib bone.

Like a patient etherized, I can’t say
what evening looks like, but I feel alone.
A little voice inside me said, “Unfair.”

Alternative Medicine explores that charged dynamic between doctor and patient, between lovers, between citizens, between self and otherness—in short, between person and person—which insists we always strive to know when we can and must touch, and when we must keep our hands off.

I’ve rarely heard someone describe his or her doctor as “accessible.”  Rafael Campo’s poetry has always been unapologetically so, but his formal decorum (from décor: “beauty, grace”) makes for poems that are both objects of deep contemplation and acts of open-hearted expression.  In a word, art.

This review was written by Steven Cramer, Director of the Master of Fine Arts in Creative Writing Program at Lesley University.  Steven is the author of five books of poetry and is the recipient of several national and regional honors including a fellowship from the National Endowment for the Arts. 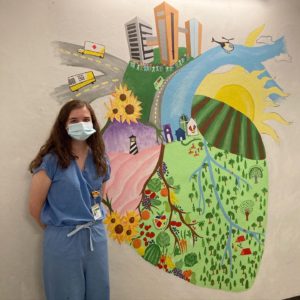 This webinar features the Voices in Humanism program, a collaboration between the Medical Heritage Center and the Gold Humanism Honor Society at the Ohio State University (OSU) College of Medicine. chevron_right Watch

Storytelling is one of the most powerful tools we have to acknowledge, distill, and share our experiences. Led by writer Judith Hannan, this workshop includes interactive prompts, as well as readings by the author, and offers an overview of her upcoming workshop series. chevron_right Watch