Anna Quindlen received the 2019 National Humanism in Medicine Medal at the Golden Thread Gala on June 13, 2019, in New York City. These are her acceptance remarks. Watch a video of her remarks here.

I was a pretty healthy kid, the kind who didn’t get anything worst than an occasional temperature and measles, of course, before we were lucky enough to be able to immunize. Dr. Rubin came to the house with his black bag and his pack of Camels, but not often; my brothers wound up in the emergency room sometimes when they got a little wild. 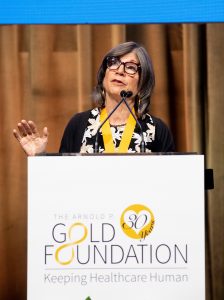 So my first real relationship with a doctor was when I was 19 years old and my mother had stage four ovarian cancer. This was back when some people thought cancer was contagious. If they mentioned it at all they called it the big C. Chemo was a blunt instrument. No ports for delivery, and a basin for the inevitable throwing up next to every gurney. Yeah, none of those recliner chairs either, or TV sets to take your mind off it.

Everybody said that my mother’s doctor was a crack clinician, so I suppose it was true. But he had the bedside manner of a manila envelope. One day, as he was leaving my mother’s room, he stopped and looked me in the eye. I was hanging out with a woman who weighed 85 pounds and was wearing clothes that I made on my singer sewing machine from a maternity pattern because her abdominal edema was so bad and so persistent. That doctor said to me, as an aside, “You know, we think this is probably genetic.” I looked at the ruins of my mother and saw my own probable future as he went down the hall.

This happened a long time ago, almost half a century, and I don’t want to suggest in any way that the delivery of health care on a simple human level hasn’t improved enormously. Several weeks ago I militated for the mother of someone I know to be admitted to hospice, and her last three days were peaceful and warm, full of pain and respiratory relief and not of 5 AM blood pressure cuffs or fluorescent lights. When my beloved sister in law was being treated for cervical cancer some years ago her wonderful oncologist walked her, her husband, sometimes me, through everything that was being done and all that might happen. When, after nine grueling rounds of chemo, she came up cancer free, those two women, doctor and patient, hugged each other and wept for a long time.

This is true of us all, but how critical it is for the doctors, nurses, midwives, physicians assistants and others who see us at our most vulnerable, our most fearful, our most transcendent.

Doctors and nurses have been there for some of the most important moments of my life: when my children were born, when my parents were dying, when my friends were struggling with illness and incapacity. I was always relieved if they were adept clinicians, if they had the newest and best treatments and technology at their fingertips.

But honestly, I cared most that they were kind, that they were understanding, that they modeled what the Gold Foundation stands for, a human connection in the partnership of health care. Doctor and patient sounds like an unequal power dynamic. Person to person is so much more soothing.

It is a conundrum, that the better we have gotten at tackling many illnesses and conditions, the farther we have sometimes moved away from the people who actually have them.

Transplanting hearts is an occasional miracle, but touching hearts should be done every day. Looking at the screen of a tablet doesn’t come close to looking a person in the eye. The same technology that enables us an unprecedented look inside the human body sometimes distances health care professionals from the spirit within that body.

That, sadly, is one reason why so many of them are disenchanted. I’m sure some people see the goals of this organization as a clear benefit for patients, and that is true. But bringing the human touch into health care is a net positive for health care providers who are beaten down and burnt out. “Warmth, sympathy, and understanding may outweigh the surgeon’s knife or the chemist’s drug,” reads one version of the Hippocratic oath, but over the years the words of that oath may grow distant, and the mission less people, more paper.

The simple truth: Charts don’t love you back.

I remember an event at which an older doctor told me that when he was leading medical students on rounds, one asked afterwards why he had bothered to manually take the pulse of a patient they had seen. After all, weren’t all the patient’s vitals reflected, perhaps better than the doctor’s fingers on a wrist could ever do, on the electronic screen to one side of the bed’s head.

It’s important, the veteran told the neophytes, to lay hands on the people we treat, to touch them. But of course he meant more than taking a pulse. He was warning young physicians not to lose touch with the humanity of their patients, that they were treating a person, not a condition.

“Touchy feely,” he said one of his colleagues once said disdainfully of what he was doing, and he merely replied, “exactly.” I once wrote a column in The New York Times about a professor at NYU medical school who taught a course designed to teach incoming students about human behavior titled Behavioral Science. Everybody called it BS. He considered it critical care.

I know you must often feel under fire these days. There’s so much criticism of the health care system, everything from delays in appointments to insurance reimbursement. All my friends complain. They hate the system.

But they love their doctors. That’s the bottom line. We often feel as though you hold our lives in your hands. We don’t want to feel like you’re doing that at arm’s length.

The lack of human connection is not only tainting the delivery of health care in this country. It is poisoning everything. It is what has poisoned our culture, our community, and our character. The very worst things done in this country are done out of an unwillingness to recognize and acknowledge our shared humanity. Homophobia, sexism, racism, religious bigotry, xenophobia: they all arise out of an essential disconnect that causes us to turn others into merely constructs.

It diminishes the lives of all of us when that happens.

Let me tell you about the last time I saw the doctor who treated my mother, because I think it illustrates perfectly the chasm between who health care providers sometimes are, and what they ought to be. It was in a Catholic church. I was walking behind a coffin. He was standing in the last pew.

I suspect, given his specialty, that he did not go to many, or even any, of the funerals of his other patients, so perhaps my mother, who was very young and very good-natured, had touched him in some special way. If that was so, he had never indicated it any of the many times he had seen her at the hospital. I only suspected it because, looking over the curve of polished wood, past the crucifix, I thought I saw the sheen of tears in his eyes.

Ah, but your patients want your caring when they are still alive to feel it.

When I raised ethical questions about changing the scope of my father’s treatment because of the low likelihood of recovery and the enormous physical and spiritual costs he would bear if he were aggressively treated, the team treating him acted as though those questions were appropriate and sensible. They made me feel like a good daughter, not the opposite, for asking them.

The social worker stopped by the room each day to ask how I was doing.

One of the nurses offered to play music when I wasn’t around when she saw me doing the same during visiting hours, and asked for a playlist.

One of the doctors came to discuss with me switching to palliative care. Three times he said to me, “I know this is difficult.”

Two weeks after my father died the staff sent me a sympathy card.

My father had excellent clinical care. But those are the things I will remember. And you need to remember them, too, because there is no technology, no information, no tests or treatments, no surgeon’s knife or chemists drug, in the words of the oath, that can take the place of that kind of simple humanity. I am honored to be here tonight for the Gold Foundation, which not only believes that but that lives the truth of it through everything it does, for patients and for health care professionals as well.