The Arnold P. Gold Foundation will host its annual Golden Thread Gala on November 1st at the Lighthouse at Chelsea Piers in New York. This year, the event will honor the Surgeon General of the United States Dr. Vivek Murthy, 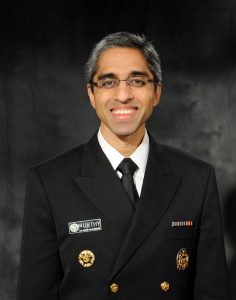 as well as Dr. Jordan Cohen, Chair Emeritus of The Arnold P. Gold Foundation. Each will receive the 2016 Humanism in Medicine award to recognize them as exemplars of the Gold Foundation mission to ensure that healthcare is delivered with the highest professional skill and human compassion.

The Golden Thread symbolizes the weaving of science and the human side of healthcare. “Our gala awards ceremony provides us with the opportunity to recognize individuals who have worked hard alongside us to keep healthcare human,” said Dr. Richard Levin, President and CEO of the Gold Foundation.

Surgeon General Murthy is one of our nation’s top leaders in public health and a universally respected physician. He is an activist Surgeon General who called on all physicians in the US to help stop the opioid crisis stating, “Healthcare is more than an occupation to us. It is a calling rooted in empathy, science, and service to humanity.” Dr. Murthy has also made emotional well-being a priority for his term, which is a main focus of the work of the Gold Foundation.

Dr. Cohen is a respected name n academic medicine. As Chairman Emeritus of the Association of American Medical Colleges, he pushed to make sure medical schools upheld scientific and professional values. He also served as Chairman of The Arnold P. Gold Foundation’s Board of Trustees from 2006-2016. Under his leadership the foundation strengthened its role as leader in a national movement in health professions education and practice that recognizes humanism as the core of healthcare.

“We are privileged to honor two persons who exemplify the best of medicine. Both have served as clinicians, teachers and national leaders and understand that the best possible care and the best health outcomes cannot be achieved unless science and compassion are part of the care,” said Levin.

Dignitaries from the fields of medicine, business and philanthropy, are expected to gather for the event, now in its third year.

The evening will feature remarks from the honorees as well as musical entertainment from medical students at the Unifromed Services University.

For tickets and more information about the Golden Thread call 212-763-8590, or email goldfoundation@cmevents.net.