This article was first published on the AAMC website here. 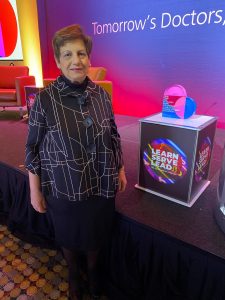 As a child growing up in Egypt, Mona Fouad’s parents primed her to become a world-renowned musician.

When, as a teenager, she received high enough marks in school to attend medical school, her piano teacher urged her to dismiss her draw to the sciences.

“My piano teacher told me medicine is not for women,” Fouad, MD, MPH, recalled on Nov. 12 at Learn Serve Lead 2022: The AAMC Annual Meeting in Nashville, Tennessee.

It would not be the last time she would go against the grain.

During her final year of medical training in Egypt, she was assigned to work in an underserved, rural town outside of Alexandria. The experience opened her eyes to what she would later know as the social determinants of health.

“The people in this town were not able to pay for medical care, and they suffered from chronic illnesses to an extent I had never seen before,” Fouad said. “Patients die before they get their turn to be seen at the free university hospital. I saw the situation that men and women were in and wondered, even if they could afford to see a doctor, how would they get there? Who would watch their children?”

These questions came back to her when, in the 1980s, she and her husband were living in Birmingham, Alabama, where her husband was offered a job at the University of Alabama at Birmingham (UAB). Fouad, after completing a master’s degree in public health at UAB, began volunteering at a preventive medicine clinic, eventually securing a research fellowship.

“At this time, national research was beginning to demonstrate the same thing that researchers at UAB were finding: that health outcomes were different for different groups of people,” Fouad said. “Some demographics were more likely to develop chronic or acute diseases and were less likely to survive.”

In Birmingham, like in the town outside of Alexandria, she recognized that social issues contributed to poor health outcomes in underserved communities — an idea that was not widely accepted at the time.

Many fellow physicians and researchers told her that health disparities work was not really contributing to medical science and that it was only “feel-good community work.”

“Even hearing these things, I persisted,” she said.

In the decades since beginning her research, Fouad has built a lauded career in health disparities research and health equity initiatives.

It was in recognition of her contributions to health disparities research that she was awarded the 2022 Vilcek-Gold Award for Humanism in Healthcare, which was created by the Vilcek Foundation and the Arnold P. Gold Foundation to recognize outstanding immigrant health care professionals whose work has shown a commitment to humanism. Previous recipients include Mona Hanna-Attisha, MD, MPH, who blew the whistle on the Flint, Michigan, water crisis, and Denisse Rojas Marquez, MD, MPP, and Jirayut “New” Latthivongskorn, MD, MPH, who co-founded an organization aimed at helping recipients of the Deferred Action for Childhood Arrivals (DACA) program called Pre-Health Dreamers.

Fouad developed models for recruitment and retention of minoritized people in clinical trials and innovative community-based approaches to reducing racial disparities in breast and cervical cancer, as well as for chronic diseases prevention and control. She also founded the UAB Minority Health and Health Disparities Research Center (MHHDRC), which is focused on research, training, and community engagement.

The MHHDRC has worked on national programs and has formed partnerships with historically Black colleges and universities to recruit and retain researchers from diverse backgrounds, which, in turn, helps to expand the research into health disparities, she said. 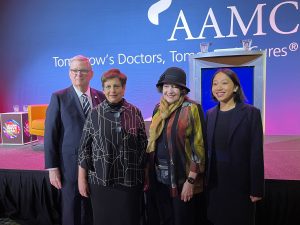 Programs like the ones Fouad has developed have been implemented across the country and even internationally, including back in Egypt, but she finds that Alabama serves as an opportune place for her research because of its poor health rankings.

“Alabama ranks near the bottom 5% [in the United States] in almost every major [health] category,” she said.

Through her work at the MHHDRC, Fouad and her colleagues hope to change that with initiatives ranging from building sidewalks and bike lanes in overlooked neighborhoods to bringing mobile grocery vans and preventive screening clinics into underserved communities.

But most importantly, she has learned the importance of listening to the people to understand how to best meet their needs.

“I learned a lot from colleagues and staff that took me to the community and taught me how to communicate and how to present our work to the community,” she said. “First, they told me, ‘Trust is earned, it is not given.’ So you have to work to earn the trust of people.”

In the 2022 Jordan J. Cohen Lecture at the AAMC, Dr. Lawrence Smith highlights the importance of joy in medicine