This year’s Jordan J. Cohen Humanism in Medicine Lecture at AAMC featured Lawrence Smith, MD, MACP, Founding Dean of the Donald and Barbara Zucker School of Medicine at Hofstra/Northwell, Executive Vice President at Northwell Health, and Gold Trustee. It was both a sobering and hopeful look at how doctors can reclaim joy in medicine, in the face of myriad challenges.

The Cohen Lecture is a signature event at Association of American Medical Colleges (AAMC)’s Annual Meeting, Learn Serve Lead, and a collaboration between the Gold Foundation and AAMC in honor of Gold Foundation Trustee and President Emeritus of the AAMC, Dr. Jordan J. Cohen. Past speakers have included former California Surgeon General Dr. Nadine Burke Harris, bestselling author of In Shock Dr. Rana Awdish, former CMS administrator Dr. Donald Berwick, novelist Anna Quindlen, and activist and writer Parker Palmer, among many other luminaries, both in and outside of healthcare. 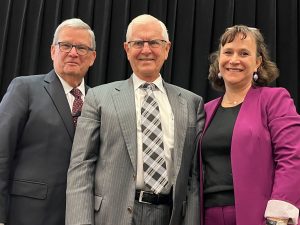 From left to right, Dr. Richard I. Levin, President and CEO, of the Gold Foundation, Dr. Lawrence Smith, and Dr. Ellen Pearlman, the Associate Dean for Professionalism and Doctoring Skills at Zucker School of Medicine.

The 2022 Cohen Lecture, “Systemic Barriers to Humanism and Professionalism,” took place at AAMC’s first in-person meeting in over two years, held in November in Nashville.  Dr. Ellen Pearlman, Associate Dean for Professionalism and Doctoring Skills at Zucker School of Medicine, and Dr. Richard I. Levin, President and CEO of the Gold Foundation, joined Dr. Smith in a conversation following the lecture.

Dr. Smith began his talk by recalling an observation made by a previous Jordan J. Cohen lecturer and fellow Gold Trustee, Dr. George Thibault: “It will be very difficult to have humanism in medicine if we do not have humanism in our world.”

“Starting with that hypothesis,” said Dr. Smith, “I have asked the question: Can you be empathetic, humanistic and relate to patients in a way that they trust you and see you as their doctor and healer in a world where everything seems to validate that mistrust is the way to go? How do we do this? How do we have a reserve of empathy?”

Dr. Smith’s talk drew on his own career and experiences, showing how lessons learned become lessons taught. The thread that connects one generation to the next in medicine can be adapted for changing times, but at its core remains a story of compassion and the desire to help, and to heal.

Personal stories gave the talk both a touch of humor (“I am, I think, the only standing living dean of a medical school that was left back in kindergarten.”) and reality, as Dr. Smith recalled family members’ positive and negative experiences with healthcare clinicians.

His residency at Strong Memorial Hospital, of the University of Rochester Medical Center, proved to be an auspicious match. “The residency was ahead of its time,” said Dr. Smith. “It was rivetingly focused on humanism.”

He recalled that the program placed emphasis on resident well-being. It was among the first to introduce the night float system, one of the reforms in medical education that addressed resident duty hours, and had practices in place to recognize and address burnout.

Teaching patient care through a humanistic lens was also a priority.  Residents were trained to “present their patient” – in which they would review a patient’s case and discuss diagnosis and treatment with the whole medical team—in front of their patient, offering the patient the opportunity to correct them or add something. And each time a patient died, the entire team would “stop completely” to pay their respects, and to discuss what it means to lose not just a patient, but a “human being under your care.” 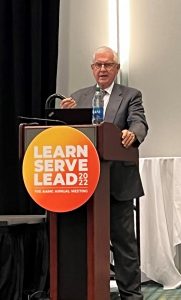 Dr. Smith’s career took him into the United States Army, where he worked in a military hospital for several years before joining a multi-specialty practice in Long Island, New York.  He then moved into academic medicine, where the lessons he learned throughout his own career became the foundation for his years teaching and mentoring trainees.

He recalled a former colleague telling him stories about patients, one after the other – some funny, some sad – before imparting advice that still resonates with Dr. Smith: “And in the end, he said, ‘It’s just one patient story after another. As long as you remember that, you’ll be a great teacher.’”

Dr. Smith told a story of a survey he used to take of audiences before he presented Grand Rounds at various hospitals and medical schools. He would ask them to write down one attribute about the best doctor they had ever seen. Some of the responses included:

“That’s not a complete list, and I’m sure I didn’t do the right statistics in my nonscientific study, but I want you to remember that [last one],” said Dr. Smith. “When doctors are no longer joyful, care deteriorates, and their joy in being a doctor goes right out the window.”

But the “business of medicine” has threatened to poison the feeling of joy in medicine, Dr. Smith warned, citing income disparities among specialties, thinking of physicians as transactional “providers,” overregulation, and changes in the insurance landscape. In particular, Dr. Smith pointed to the heavy load of administrative tasks tied to the electronic health record as an oft-mentioned source of burnout and a significant time-drain on physicians.

“We need to build teams that support doctors,” said Dr. Smith. “The ‘non-doctor stuff’ is now two to one in all the studies compared to…seeing and touching and talking to your patients.”

Dr. Smith described the hurdles facing doctors – overflowing inboxes, call centers and endless hospital phone trees, the corporatization of practices and scheduling – and then circled back to solutions that might help restore the heart of medicine.

“Doctors need to have time to be with other doctors, both socially and not socially. They need to actually talk to [specialists] they’re sending patients to instead of typing notes and hoping for the best,” said Dr. Smith. “They need to find mentors early in their practice and be mentors later in their practice.”

He ended with a story about the criteria used when he was beginning to hire faculty at Zucker School of Medicine: “We had one criteria for faculty, and that is the answer to this question: Do you wake every morning and love being a doctor?”

To his mind, there was only one right answer.

“We don’t ever want our students to see someone who does not love being a doctor.”

Golden highlights from the 2022 AAMC Annual Meeting in Nashville

The Association of American Medical Colleges (AAMC)’s Annual Meeting returned to in-person after two years away, and the Gold Foundation and its message of humanism were there in full force. … chevron_right Read more