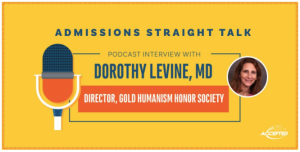 Gold Humanism Honor Society Director Dorothy Levine, MD, spoke with Linda Abraham of Admissions Straight Talk Podcast in a wide-ranging interview that touched on the honor society, humanism, the origins of the White Coat Ceremony, the legacy of Dr. Arnold Gold, and much more.

Linda Abraham is the founder of Accepted.com. Her weekly podcast provides insights and discussions into the world of graduate education acceptances, including medical school.

This 248th episode, which aired February 27, 2018, featured Dr. Levine, a former pediatrician and the director of the Gold Humanism Honor Society.

Listen to the full podcast with Dr. Levine.

The following are excerpts from the interview.

What is the Arnold P. Gold Foundation, and can you give me a little background as to its founding? [1:21]

The Arnold P. Gold Foundation is a nonprofit organization whose mission is to infuse and sustain our healthcare system with a culture of compassion, caring, and respect for patients and practitioners. It began in 1988 when Dr. Arnold Gold realized he had to do something to combat the depersonalization of the patient/physician relationship that he saw developing in front of his eyes. He was a pediatric neurologist who taught students and saw patients, and he saw this distancing developing. His effort was helped enormously by the passionate and seemingly limitless energy of his wife Dr. Sandra Gold. Donations from physician friends and grateful patients allowed the dream to become a reality. Over the years sympathetic administrators have joined in and provided financial support, and most recently reach has grown from the creation of a corporate council of healthcare-related companies. The aim is to maximize the impact the organization has on goals to keep all patient activities as empathetic as possible.

In the old, old days there was often not much physicians could do – there was lots of hand holding, sitting by a patient’s bedside, empathy, and compassion. As the power to change the course of the illness through diagnostics grew, I think doctors got very busy doing those things – ordering tests, interpreting them, and the patient got further away. Then you have the managed care company or insurer. It used to be that doctors would hand the bill directly to the patient and negotiations for payment would happen directly between those two parties. When insurers got involved, the patients suddenly seemed to not even be yours anyway, and then electronic medical records put the finishing touch on this depersonalization, as the doctor is very well meaning but busy looking at a computer screen.

How did you get involved with the Gold Foundation? [5:42]

I was a lucky pediatric resident at Columbia Presbyterian Babies Hospital from 1980-1983, studying to be a pediatrician and I met Dr. Gold, who was one of my professors of pediatric neurology. He was one of my most beloved physicians on the faculty there. There can be an emphasis on lack of compassion with doctors, and he absolutely was not that way. He was a wonderful man and I periodically sent my patients with the most difficult neurological problems to him to diagnose. When I retired several years ago I met Dr. Levin, President and CEO of The Arnold P. Gold Foundation who had stepped in after Dr. [Sandra] Gold retired, and he encouraged me to take the position.

People spend a lot of time trying to identify and explain what it is and why it is or isn’t there. It should be an easy answer, but I think it’s present when all members of the healthcare team, from the doctor to the person who cleans up the vomit, treat their patients with dignity and compassion. If anyone on the team is failing it is felt by the patient in the bed. Lately we also have felt the team of healthcare workers needs to treat themselves with the same respect. The composition of the medical profession has changed, and we are trying to encourage people who are further along to treat that “lowly” student like he or she is your child. So humanism needs to extend to the whole team. With different backgrounds and cultures, what one culture might think of as humanism another might think of as terribly rude. There is something to be said about being aware of cultures and customs. The one word I would use is kindness since that doesn’t change much from one culture to another. If you are doing something kind you aren’t that far off.

I understand that the White Coat Ceremony originated with Dr. Arnold Gold. Can you give us a little background? [11:58]

The longstanding tradition in medical education was that med students would take the Hippocratic Oath at the end of their medical training, which can be summarized as, “I will not harm the patient.” The problem is that you are interacting with patients constantly while in med school, and Dr. Gold thought it would be better if students said it at the beginning of med school as opposed to the end, to imprint on their young and impressionable minds that everything needs to be done with respect and for the patient’s benefit first. So he set out to change the system. He developed this ceremony to emphasize humanism at the very beginning of training. Now, most of the schools in the country actually begin with a White Coat Ceremony and it is very touching, the ones I’ve seen. Empty white coats are in an empty auditorium waiting for the students along with a stethoscope at each chair, the students file in, and poignant words are said by some of the mentors and leaders of the school about how important compassion and respect are. The first ceremony took place in 1993, fittingly at Columbia where Dr. Gold was. The Robert Woods Johnson Foundation has subsequently helped to fund it in other places around the country, and now the ceremony is fairly ubiquitous in the US, and 19 countries also do it. Recently nurses’ colleges have begun to do it as well, now with more than 200 nursing schools participating, and physician assistant programs are starting to join in, too.

In 2002 the foundation decided they needed a team to carry the mission forward, as there is only so much that can be done from world headquarters in New Jersey. With this signature program, med schools apply to open up a chapter to recognize medical students, residents, and faculty who model the values of the Gold Foundation – integrity, compassion, respect. These individuals become ambassadors of humanism at their schools. About 30,000 physicians have gotten the award since 2002. The hope is that once they get into practice they keep the flames burning. Once you are in practice, you are allotted 10 minutes to do everything you need to do, and the first thing that goes is holding someone’s hand, so it’s a struggle.

How does one become a member of the Gold Humanism Honor Society? [20:12]

At a school a student and faculty member have to apply to open a chapter. We have criteria – that the school has a White Coat Ceremony and other things. If the application doesn’t hit all the marks we work with them until it does. We have 150 chapters in America now. Once open, students select from their peer group. Up to 15% of a class can be admitted, and there is a certain set of questions asked, in particular, “If you were sick or your mother was sick, who would you like standing by the bedside caring for you or your mother?” In this case it isn’t about IQ, it is about who will treat them well and have their best interests at heart. The selection is done in the third year so students have 1.5 years to hone their empathy skills and showcase them to their fellow students.

What would you like listeners to know that we haven’t discussed? [26:34]

I would love to tell a little bit about a recent conference I went to that will energize the students. A few hundred students were gathered for the third annual Humanism in Medicine conference in the Mid Atlantic region. This year it focused on compassionate care in epidemics, with an emphasis on HIV Aids, opioids, obesity, homelessness, childhood trauma, infectious disease outbreaks, mass incarceration, and gun violence. The keynote speaker was Dr. Ben Young, one of the movers and shakers in the whole AIDS story.

The Gold Foundation provides these types of opportunities for like-minded people to get together, feed off each other, and encourage each other.

Listen to the full podcast with GHHS Director Dr. Levine.