*This article is reprinted with minor formatting updates from an earlier publication by The Vilcek Foundation.

On November 9, 2019, the Vilcek Foundation, in partnership with The Arnold P. Gold Foundation, presented the inaugural Vilcek-Gold Award for Humanism in Healthcare to Dr. Mona Hanna-Attisha at the Association of American Medical Colleges (AAMC) Learn Serve Lead meeting in Phoenix, Arizona.

Dr. Mona Hanna-Attisha was born in the United Kingdom to parents of Iraqi descent and is a pediatrician and associate professor at Michigan State University College of Human Medicine, as well as a whistleblower of the Flint water crisis. 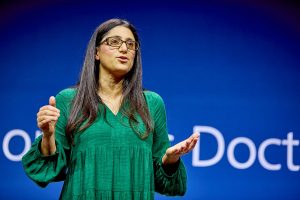 At the AAMC meeting, Dr. Mona (as most call her) presented a lecture to over 300 attendees in the celebrated discussion series Voices of Medicine and Society, which spotlights innovative scholars and thinkers who challenge the status quo in medicine and public health.

Dr. David J. Skorton, president and CEO of the AAMC, and Dr. Richard I. Levin, president and CEO of The Arnold P. Gold Foundation, made introductory remarks, highlighting the partnership of the organizations that allowed for the new award, and the invaluable need for immigrants to contribute to the field of medicine and healthcare. “Mona’s advocacy and her work as a physician and researcher is that of a champion of humanism — of someone who truly elevates our society with human interests, values, and dignity at the core tenets,” Dr. Levin said. 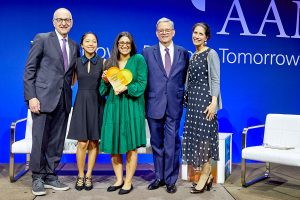 When Dr. Mona took the stage to accept the award, she spoke candidly about her 2014 discovery of dangerously high lead levels in her young patients. Her memoir, What the Eyes Don’t See: A Story of Crisis, Resistance, and Hope in an American City, details her repeated advocacy to Michigan government officials, forcing the state to acknowledge the crisis and put forth a plan of action.

“Pediatricians are the ultimate witnesses to failed social policies,” Dr. Mona said. “It’s not easy being a whistleblower. But I quickly realized this fight has nothing to do with me, but everything to do with my kids. Every number in my research was not just a number. It was a child.”

She also imparted stories of her immigrant upbringing, and the lessons that her Iraqi parents and relatives instilled in her that guided her during her journey in Flint from a clinical educator to a detective scientist to a patient advocate. “We came to the United States as immigrants. We were basically refugees, in search of a peaceful and prosperous place for me brother and I to grow up,” Mona said. “To understand me as a doctor and to understand what I did and do in Flint, you have to understand me as a person and where I came from. That immigrant perspective defines who I am and how I see the world, and how I practice as a physician.” 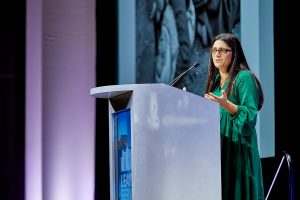 In her closing remarks, Mona implored the audience to speak up when witnessing injustice. Referring to the ongoing crisis of detained children at the U.S.- Mexico border, Dr. Mona said, “You’ve seen their pictures, of children in cages, separated from their parents, now victims of government sanctioned child abuse — which as a pediatrician, we know has the potential to leave lifelong developmental scars. I urge you not to look away.”

Read more about the Vilcek-Gold Award for Humanism in Healthcare.

Full video of her lecture below, courtesy of AAMC: 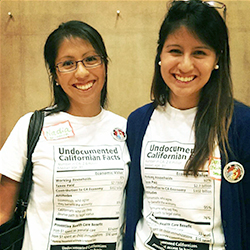