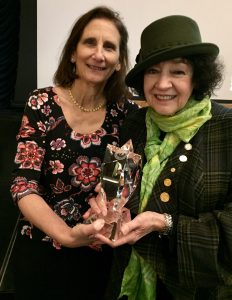 Dr. Dorothy Levine and Dr. Sandra Gold, right, who accepted the award on behalf of her husband, Dr. Arnold Gold.

Dr. Arnold P. Gold, a legendary Columbia pediatric neurologist and professor and pioneering advocate for humanism in healthcare, was honored posthumously with the 2018 Distinguished Alumnus Award on April 20 by the Babies Hospital Alumni Association.

Dr. Sandra Gold accepted the award on behalf of her beloved husband and extolled the role of Babies Hospital (the former name of the pediatric hospital of Columbia). “Arnold loved every year at Babies Hospital. He loved practicing medicine here mostly because of his brilliant and humanistic colleagues, men and women to whom he could refer his patients.”

Dr. Sandra Gold also quoted Dr. Dorothy Levine, the Director of the Gold Humanism Honor Society (GHHS) who was once a pediatric resident at Columbia and who nominated Dr. Gold for this award: “Arnold never let convenience or convention interfere with the well-being of his patients.”

Dr. Arnold Gold came to Columbia University in 1958 for his fellowship in pediatric neurology and stayed until his retirement more a half-century later.

Beloved by patients, families, student and fellow faculty, Dr. Gold was known for his deeply empathic care and thoughtful inclusion of the entire family in the care of his young patients.  He treated tens of thousands of children who came to Babies Hospital and taught hundreds of pediatric residents and thousands of medical students.

As Dr. Gold shared in an interview in 2016, “It was really a package deal. It was not just the child — I’m a child neurologist. I’ve been at Columbia College of Physicians and Surgeons for the past 57 years. I practiced there for 57 years, and taught medicine, so I loved not only my patients, the children, but I really loved the medical students, interns and residents, being a teacher of medicine. So I had a duel occupation, so to speak. ”

In the 1980s, Dr. Gold became increasingly concerned that the new inventions and exciting technology in healthcare were beginning to overshadow the personal connection with the patient. He believed that compassion and collaboration are as critical to healing as scientifically excellent care.

His alarm sparked him into action. And in 1988, at age 62 and while still teaching and practicing at Columbia, Dr. Gold and his wife, Sandra, founded The Arnold P. Gold Foundation to champion humanism in healthcare. Dr. Gold enlisted the support and help of his humanistic colleagues at Babies Hospital, as well as the Columbia dean at the time.

In the decades following, the Gold Foundation spread the White Coat to schools across the nation and the world. Nearly every medical school in America, 260 nursing schools, physician assistant programs, and many other schools of healthcare professions now begin students’ training with this rite of passage to emphasize the importance of compassionate patient care.

In 2002, the Gold Foundation created the Gold Humanism Honor Society (GHHS) to recognize role models of humanistic patient care at medical schools. More than 30,000 students and faculty have been inducted into GHHS. Dr. Dorothy Levine, Director of GHHS, said of Dr. Arnold Gold in her remarks during the ceremony, “His wise, empathic counseling often provided hope, solace and a path forward for parents whose children had received devastating diagnoses. His medical knowledge, skill and compassion impacted the clinical care of the patients he cared for, and provided a model for hundreds of pediatric residents and thousands of medical students who trained under him. I was lucky enough to be one of them.”

Dr. Gold also published widely as a Columbia professor, writing several books and numerous articles that spanned the intersection of neurology and endocrinology, psychology, hematology, cardiology, ENT, and infectious disease. He volunteered on committees at Columbia, as well as in his New Jersey community and throughout the state of New York. Over his long career, Columbia’s College of Physicians and Surgeons awarded Dr. Gold many honors, including its Distinguished Alumnus Award and Practitioner of the Year, as well as the Dean’s Award for Distinguished Service.

Dr. Levine ended her remarks by sharing what Dr. Gold would have said if he had been at the ceremony:  “This work is not done yet. Please don’t give up despite the obstacles put in your way. In fact, it would be really great if you could redouble your efforts on behalf of compassion and empathy.”