April 30, 2018 — The Arnold P. Gold Foundation is pleased to announce that 2018 Pearl Birnbaum Hurwitz Humanism in Healthcare Award will be presented to Dinali Fernando, MD, MPH, who has done groundbreaking work caring for survivors of torture and human rights violations. 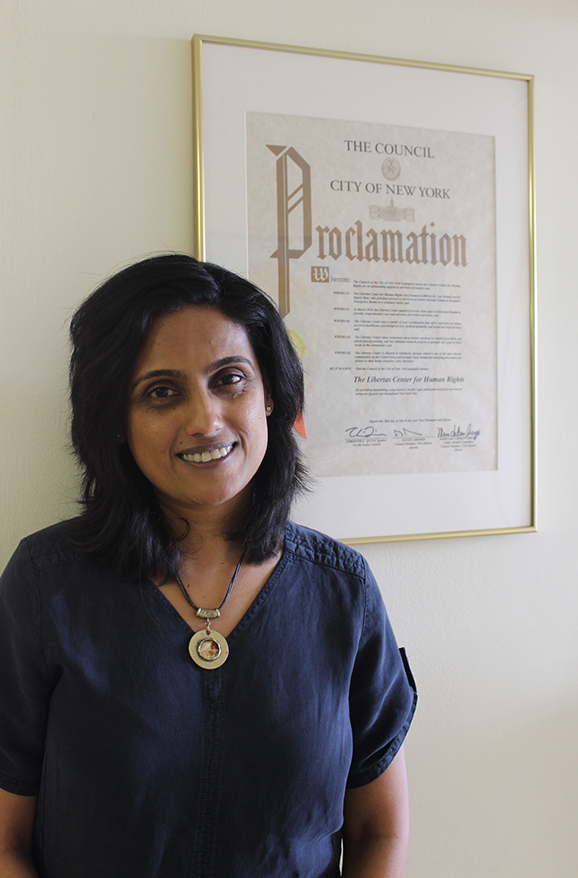 Dr. Dinali Fernando in the Libertas  Center for Human Rights offices, beside a proclamation from the New York City Council honoring the center’s work.

Dr. Fernando is the Medical Director of the Libertas Center for Human Rights, a program of the Emergency Medicine Department at Elmhurst Hospital in Queens, New York; an emergency medicine physician at Elmhurst Hospital; and an assistant professor at the Icahn School of Medicine at Mount Sinai. The Libertas Center provides medical, psychological, social and legal services designed to meet the complex needs of patients who have been tortured in their home countries and are now seeking refuge in the United States. Under Dr. Fernando’s leadership, the Libertas Center has grown from a volunteer program to a multi-disciplinary treatment center and national leader for this underserved population.

Through this annual award, the Gold Foundation honors the spirit of Ms. Birnbaum Hurwitz, who crusaded for children with disabilities, by celebrating a woman who has been a change agent, who advocates for the vulnerable among us, and who significantly impacts the lives of innumerable people.

“We are humbled by Dr. Fernando’s work, and the work of the entire staff of the Libertas Center for Human Rights, and its great impact on the lives of those who have suffered torture by providing them such specialized and humanistic care. Her work embodies the same spirit of Pearl Birnbaum Hurwitz’s – in seeking to help those who have been overlooked and address their needs as fully and specifically as possible,” said Elizabeth Cleek, PsyD, Chief Program Officer of the Gold Foundation.

Originally from Sri Lanka, Dr. Fernando has been committed to advocate for the underserved for her entire career. As a medical student at George Washington University, she first gained experience with the specific needs of this population through Northern Virginia Family Service’s Program for Survivors of Torture and Trauma.

When Dr. Fernando became an emergency medicine resident physician at Mount Sinai, she was introduced to the Libertas  Center for Human Rights, which was then a volunteer program founded by her two mentors, Dr. Beattie and Dr. Bais, who were emergency medicine attending physicians at Elmhurst Hospital. At the time the Libertas program was  providing pro bono forensic medical evaluations, a critical part of asylum applications, for patients who had been tortured in their home countries for reasons such as  their race, religion, gender, political beliefs, or sexual orientation. Dr. Fernando joined the volunteer program as a resident in 2006 and became  the Director of the Libertas  Center in 2009.

In  efforts to illuminate the scope of this population, Dr. Fernando helped conduct a cross-sectional study of patients presenting to the Elmhurst Hospital Emergency Department that found that about 6.5% of study patients  had experiences that met the United Nations Convention Against Torture definition. Given that the Elmhurst Hospital Emergency Department handles about 90,000 visits annually, this  translates to several thousand torture survivors, a population with multifaceted  and urgent needs, walking in through their doors.

In over a decade at the Libertas Center, Dr. Fernando has trained more than 1,000 providers on how to identify and care for survivors of torture and human rights violations. She has secured over $2.5 million in grant funding, including from the U.S. Department of Health and Human Services, the United Nations, New York State Department of Health, and the New York City Council, to expand the center’s core mission of direct services, and develop the other pillars of the organization: Education, Research, Policy/Advocacy and Alternative Therapies. She has advocated locally and on Capitol Hill, with the Queens Borough President Immigration Task Force and New York City Council, Senators and Congressional representatives for solutions to challenges faced by torture survivors. And under her direction, Libertas Center has become a national leader, with a role in the National Consortium of Torture Treatment Programs.

Today, the Libertas Center has six core staff members and serves about 150 patients at any given time with an array of services.

And as one patient of the Libertas Center said, “The Libertas Center opened a window of opportunity and hope. You turned my life around from a distressed refugee to a promising person in the American society. You gave me a second life.”

Dr. Fernando’s medical students, residents and colleagues praise her compassion and her humanistic values, her great teaching and her position as an excellent role model.

Dr. Arlene Chung, assistant professor at Icahn School of Medicine at Mount Sinai, nominated Dr. Fernando, quoting a student: “In short, she’s amazing. She’s one of the most hard-working, personable and approachable physicians I’ve interacted with. Her dedication to the center’s work and energy is inspiring.”

This year’s Pearl Birnbaum Hurwitz Humanism in Healthcare Award was presented to Dr. Fernando on October 10, 2018, in Boston during Planetree’s International Conference on Person-Centered Care.

Read more about the work of Dr. Fernando and the Libertas Center.

Kathleen Reeves, MD, for her immense impact on urban distressed communities, particularly north Philadelphia and the neighborhood surrounding Temple University, where she is Professor of Clinical Pediatrics in the Lewis Katz School of Medicine, founding Director for the Center for Bioethics, Urban Health and Policy and Senior Associate Dean for Health Equity, Diversity and Inclusion. Dr. Reeves led the creation of the first and the only Master of Arts Degree in Urban Bioethics in the country, a program based on how health disparities are inherently unethical and unacceptable. Dr. Reeves was also instrumental in the creation of Philadelphia CeaseFire, a violence intervention and prevention program that has used mentorship, violence interruption, and new opportunities to decrease local shootings.

Marlene Melzer-Lange, MD, for her leadership in violence prevention and Project Ujima, which connects victims of violent crimes in Milwaukee with support and resources to reduce the physical and psychological impact of the trauma. Dr. Melzer-Lange is a Professor of Pediatrics at the Medical College of Wisconsin and Program Director of Project Ujima. (Ujima is a Swahili word that means “working together to make things right.”) Project Ujima meets families where they are, providing hospital-based services such as social/emotional assessment, home-based services such as medical follow-up of injuries, and community-based services, such as support groups and the Project Ujima summer camp. Through Dr. Melzer-Lange’s leadership, Project Ujima also became a founding member of the National Network of Hospital-Based Violence Intervention Programs, which works to advise and replicate violence-prevention programming in communities across the globe.

Pearl Birnbaum Hurwitz (1907-1993) was an advocate and humanitarian who championed the needs of vulnerable populations and fought for legislation to protect and bolster the lives of individuals who, by virtue of physical, social or economic circumstances, required services. One of her sons was born with intellectual disabilities and she quickly became a leader in the movement to provide services and support for children with disabilities and their families, especially in the Massachusetts area. She was the founding president of the Arc of Massachusetts.

The award in her name was established in 2014 by a generous gift from Dr. Ronald Arky, the Daniel D. Federman Professor of Medicine and Medical Education at the Harvard Medical School and Master of the Francis Weld Peabody Society at that School. As a young doctor, Dr. Arky was greatly influenced by his time spent with Pearl and her husband, Dr. David Hurwitz.