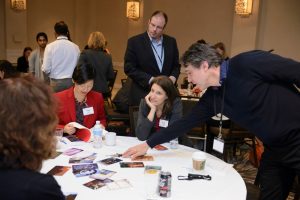 On May 7, 2017, the Arnold P. Gold Foundation Research Institute hosted the annual Mapping the Landscape, Journeying Together (MTL) Symposium. The event was designed for MTL grantees to share their progress on projects they undertook with support from the Gold Foundation and to build skills in research and advocacy. This meeting of 80-plus highly dedicated academics and practitioners possessed a distinct flavor: one in which intellectual curiosity and academic drive coexisted with kindness and genuine compassion.

A Place for Ideas

One of the major strengths of the annual symposium is its ability to bring together a diverse community of practice dedicated to increasing humanism in healthcare. The symposium highlighted the Foundation’s commitment to an interdisciplinary approach to research. The conference was attended by researchers in medicine and the social sciences, as well as several librarians from MTL teams.  Several medical students attended from schools across the country, many of whom offered oral presentations on behalf of their research teams. The confluence of perspectives from these different levels and fields of training added to the richness of ideas exchanged at the symposium.

Symposium evaluations showed that networking was one of the top three things attendees valued about the event. One attendee commented that “Networking among such a creative and stimulating group of people all focused on humanism in medicine was extremely rich.” Another said, “Knowing that there exists a group of professionals and researchers, people who share values that are rooted in humanistic values, allows me to carry out my work with more courage and confidence.”

Another important benefit of the symposium is the exposure to new ideas. Each MTL team at the end of their grant cycle gave a five-minute dynamic oral presentation about what inspired them to take on their project, what they learned from it, and what changes their findings could make on the ground.  One attendee commented that the oral presentations provided “insight and inspiration,” and others said the projects they heard about shed new light on research questions with which that had been grappling. MTL teams who were halfway through their grant cycles presented their work at a poster session, which allowed them to seek input and improve their work during the second half of their grant cycle.

One of the striking features of the Research Institute’s symposium was its emphasis on building a strong community of practice and putting into action the values that form the guiding spirit of the Gold Foundation. Ron Epstein, MD offered a session on mindfulness practice in the workplace, which one attendee described as “an amazing, amazing workshop. Really practice-changing.” Another workshop featured step-back consultations, a format in which small groups of researchers provide input on projects while the primary investigator listens without contributing. One attendee called it “one of the best sessions I have attended at any professional conference,” and another shared that the workshop “gave me an immediate sense of direction as to how to take my work to the next level.”

Participants had the option of attending morning yoga or mindfulness sessions in order to focus their minds and bodies before delving into the academics of the day. Time was allotted for informal meetings with other participants, as well as more structured “office hours” with several experts providing time for one-on-one consultations. 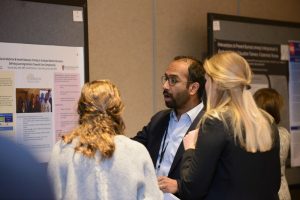 Evening events included an after-dinner interactive talk by Paul Haidet, MD and Alex Green, MD on how to think about medicine through the lens of jazz. During the second night, Laura Rock, MD hosted an open mic where participants shared stories on the theme of  “the unexpected.” One attendee commented that “the storytelling was simply extraordinary in terms of the skill of the storytellers,” and another appreciated how it allowed people to get to know others beyond their professional work.

The conference closed with a workshop from Tim Lahey, MD, who encouraged attendees to take what they have learned about humanism in healthcare and bring it beyond the Ivory Tower by writing Op-Eds. Dr. Lahey provided instructions and examples for writing, and one attendee commented that the session was “very well structured to both empower us to do this as well as create a framework to follow.” Another response was simply: “I full intend to write an Op-Ed.”

This conference brought together a strong community of practice dedicated to increasing humanism in healthcare and provided attendees with opportunities to strengthen their skills in pursuit of that goal. While it can seem like the challenges facing practitioners are insurmountable, many found the conference an inspiring microcosm of what kind of reality is possible. Ninety-five percent of attendees who participated in the evaluation said that they gained insight that will directly impact the work they do with patients, with students or in research. Meaningful change is coming; members of the MTL community of practice are committed to it.