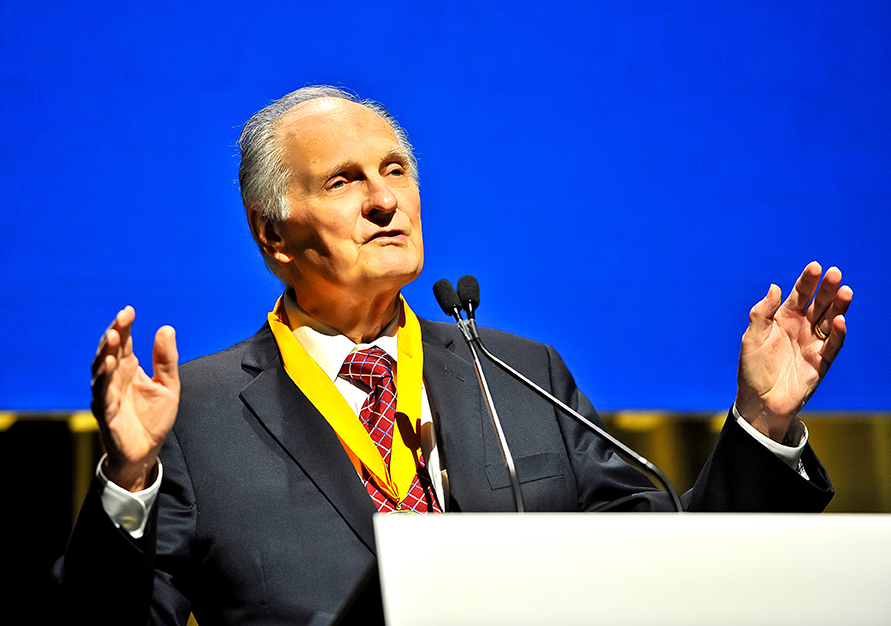 “There’s an effect that empathy has that’s extraordinary,” said Alan Alda, an honoree at the 30th Anniversary Golden Thread Gala. He received the national Humanism in Medicine Medal for his work forwarding communication practices for medical and scientific experts.

More than 400 people gathered at the historic Ziegfeld Ballroom in New York City on Wednesday evening, June 13, 2018, to celebrate 30 years of The Arnold P. Gold Foundation with joyous music, a film debut, and special honorees. The evening was dedicated to Dr. Arnold P. Gold, the namesake and co-founder of the nonprofit organization, who passed away in January at the age of 92.

The 30th Anniversary Golden Thread Gala brought together supporters of humanism in healthcare who have helped propel the foundation through its three decades. Attendees included deans of medical and nursing schools, families of former patients of Dr. Gold’s, Board trustees, Gold Humanism Honor Society members and faculty advisers, leaders in academic medicine, and philanthropists who believe in keeping the human connection in healthcare.

Dr. Darrell Kirch, the president and CEO of the Association of American Medical Colleges, and Alan Alda, Emmy Award-winning actor, author, and science communicator were honored during the event. The two men — both of whom had special ties to Arnold Gold — were awarded the national Humanism in Medicine Medal.

Dr. Jordan Cohen, a Board member and chair emeritus, as well as the past president of the AAMC himself and the 2016 awardee of the medal, introduced Dr. Kirch, who followed him as president of the AAMC. “Darrell Kirch is not only a friend and a colleague, he really is a true icon in American medicine,” said Dr. Cohen. He elaborated on Dr. Kirch’s critical support, adding “Darrell has been an unflinching partner in pursuing the mission of The Arnold P. Gold Foundation.” 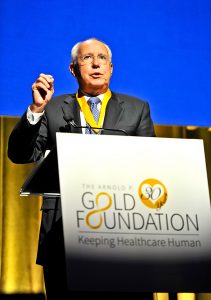 Dr. Darrell Kirch, president and CEO of the AAMC, gives his remarks on the “gifts of medicine” after being awarded the national Humanism in Medicine Medal.

In his remarks, Dr. Kirch talked about the “gifts” of medicine, such as the gift of learning from a patient who donates their body to studies of anatomy, or the gifts of from patients who share their most intimate moments, such as giving birth.

He ended by emphasizing the importance and irreplaceable nature of humanism. “Thirty years from now, we’ll probably have artificial intelligence doing much of the work we do today, but I don’t foresee artificial compassion and empathy,” Dr. Kirch said.

The evening also included the debut of a 10-minute film about Arnold’s life and legacy, which followed his childhood and determination to enter medical school into his successful career as a pediatric neurologist and the turning point that led to the creation of the foundation.

Dr. Sandra Gold, Arnold’s wife of 49 years, gave remarks following the video. She thanked the audience for their invaluable support and urged them to continue to fuel the next 30 years. She noted the special ties that Arnold had to both honorees. Dr. Kirch of the AAMC has been such a loyal supporter of humanism and of the foundation, following the previous AAMC president Dr. Jordan Cohen, and became a close friend of the Golds. This past winter, Sandra shared, when Arnold passed away, Dr. Kirch traveled to New Jersey to the temple overflowing with mourners to deliver the eulogy, which had been Arnold’s wish. 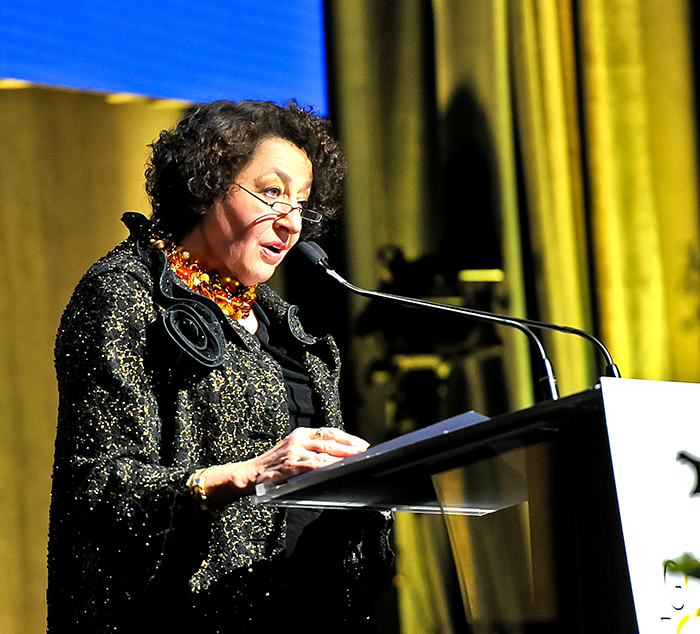 Dr. Sandra Gold, Arnold’s wife of 49 years and the president of the foundation for 24 years, urged the gala audience to continue their crucial support.

Sandra described the special connection that Arnold and Alan shared, which we learned was unknown to Alan until the gala. Arnold, who was a frequent speaker at White Coat Ceremonies, would routinely finish his remarks with advice from an “eminent physician” — which turned out to be Hawkeye Pierce, the Army captain and surgeon played by Alan Alda in the hit TV show M*A*S*H. Arnold would quote Hawkeye to the medical students: “I hope you will always remember this: The head bone is connected to the heart bone, and don’t ever let them come apart.”

“Yes, Arnold didn’t quote William Osler, he quoted Alan Alda, year after year,” Sandra said. “You two honorees were admired and appreciated by Arnold for your personal warmth, your leadership, and your passion for compassion and communication. It is so fitting that the three of you — Alan and Darrell and Arnold — are sharing the tributes this evening.”

Dr. Richard I. Levin, the president and CEO of the Gold Foundation, introduced Alan Alda, who has helped scientific and medical experts improve their communication through the innovative use of improvisation. He founded the Alan Alda Center for Communicating Science at Stony Brook University, and his techniques, called the Alda Method, have been taught to more than 8,000 medical experts and scientists.

In his remarks, Mr. Alda spoke about the impact of Arnold, and how he and Sandra launched the foundation with nothing and what a the difference one person can really make.

“It’s so moving to be a part of a great movement started by that amazing doctor who started with nothing. It really means to me, in the most vivid way, that one person – two people together – can do something that changes the world,” said Mr. Alda. “It’s not true that it doesn’t matter what one person does. There’s a linkage among what we all do.”

He emphasized the importance of compassion and the what his own work with improvisational techniques has taught him: “A lot of people think that you have the compassion you came in with and it can’t be learned – you can’t get more compassionate – but you can. Almost everybody can achieve more compassion.”

He added, “There’s an effect that empathy has that’s extraordinary.” 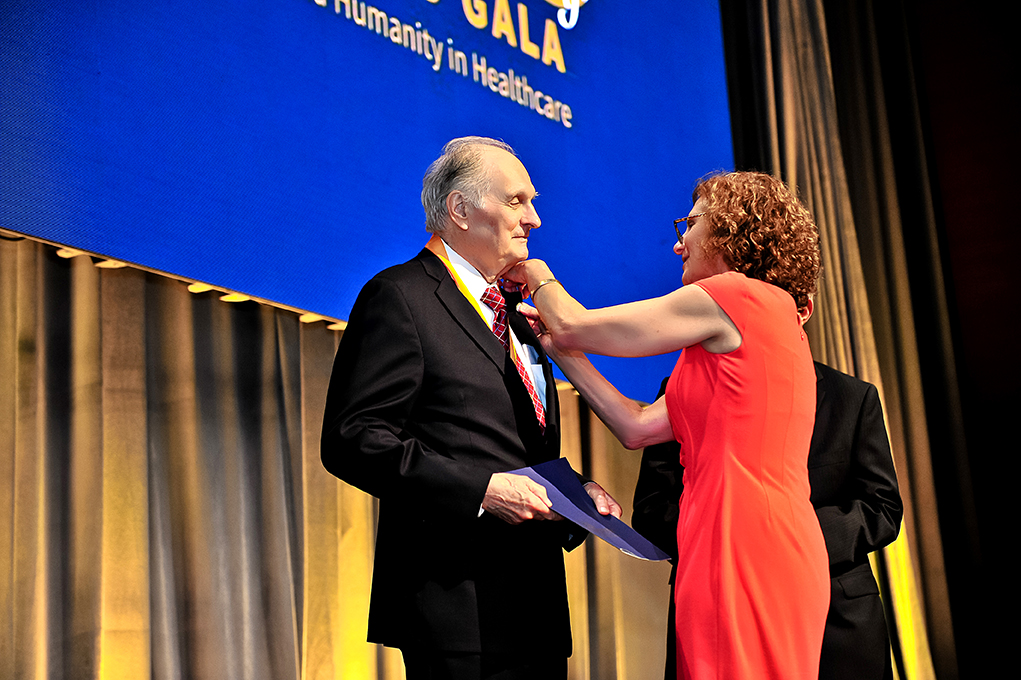 Dr. Dorothy Levine, director of the Gold Humanism Honor Society, pins Alan Alda, who was inducted into the society for his leadership in fostering open, compassionate communication among physicians and other scientific experts.

At the end of the evening, Mr. Alda was inducted into the Gold Humanism Honor Society. Dr. Kirch has been a GHHS member since 2003. The Chairman of the GHHS Advisory Council, Dr. Howard Silverman, and GHHS Director Dr. Dorothy Levine inducted Alan. As Dr. Silverman said, “The ability to see the integration of excellence and irreverence alongside empathy and humanism was very stirring. 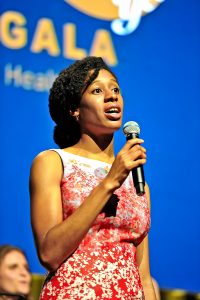 And I can remember watching episodes of M*A*S*H and going to medical school and not seeing that, but knowing that that was possible. So I want to personally thank you for that, and on behalf of my colleagues as well.”

And a special one-time choral group, formed from medical students from Columbia University Vagelos College of Physicians and Surgeons and other representatives of Columbia University Medical Center, performed a beautiful rendition of “Imagine” by the Beatles, a poignant note to the evening.

The gala marked the kick-off of The Arnold P. Gold Foundation’s 30th year. Events will continue for the next 12 months. Look for more details in the future on our Events page.