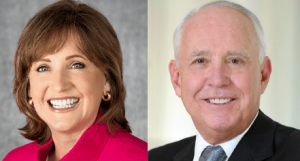 “We are thrilled to welcome Dr. Frazier and Dr. Kirch, both extraordinary leaders in the healthcare world who embody our mission and bring great talent and expertise to the table,” said Mr. Sheerr, “We are very fortunate to have them both by our side as we continue to pave the way for more empathetic, compassionate care for both patients and the whole healthcare team – an absolutely critical mission in our era.” The Gold Foundation is a 30-year-old leading nonprofit that works with organizations and clinicians around the world to support humanistic patient care.

“It is a true honor to join the Gold Foundation’s Board of Trustees,” said Dr. Frazier. “The  Foundation’s commitment to collaborative relationships among patients, clinicians and institutions is critical to advancing high-quality, compassionate care.

“It is an honor, as well as quite humbling, to be joining the Gold Foundation Board,” said Dr. Kirch. “As a college student majoring in philosophy and focused on the humanities, what drew me to medicine initially was the opportunity to focus on the person, going beyond their biology and their disease.  No organization has done more than the Gold Foundation to keep that person, and the alleviation of their suffering, at the fore of our profession from the very first day of medical school.”

About The Arnold P. Gold Foundation
The Gold Foundation is a nonprofit organization that champions the human connection in healthcare. For 30 years, the foundation has worked to infuse compassion and empathy in medicine, engaging medical schools, health systems, companies and individual clinicians around the world. The foundation is perhaps best known for the now iconic White Coat Ceremony, which marks the start of training with a recognition of the importance of caring compassionately for patients, and the Gold Humanism Honor Society, which has more than 30,000 members selected by their peers for their humanistic care.

Dean Lorraine Frazier joined Columbia Nursing from The University of Texas Health Science Center at Houston (UTHealth), where she was Professor and Dean of the Cizik School of Nursing. She completed her PhD at UTHealth in 2000 and joined the faculty in 2002, rising to Professor, Associate Dean, and Chair of the Department of Nursing Systems in 2008. Prior to that, Dr. Frazier was the Dean of the College of Nursing at the University of Arkansas for Medical Sciences.

Dr. Frazier is an accomplished cardiovascular and genetics researcher and regarded as a pioneer in developing and promoting state-of-the-art translational research programs. She also is a national expert in biobanking, the emerging science of collecting, storing, and sharing blood and tissue samples for the purpose of advancing medical research and providing access to genetic information. Dr. Frazier served as director of the UTHealth Biobank and project director for TexGen, a biobank consortium involving academic institutions across Texas. Her research into the interactions of behavior and genetics in patients with acute coronary syndrome has been funded by the National Institutes of Health.

Dr. Darrell G. Kirch is President Emeritus of the Association of American Medical Colleges (AAMC), which represents the nation’s medical schools, their teaching hospitals and health systems, and related academic societies. He served as President and CEO of the AAMC from 2006 through July 14, 2019.

A distinguished educator, biomedical scientist, and clinician, Dr. Kirch speaks and publishes widely on the need for transformation in the nation’s health care system and how academic institutions can lead change across education, research, and health care for their communities and beyond. As a respected university leader, Dr. Kirch has chaired the Washington Higher Education Secretariat and served as a member of the American Council on Education Board of Directors. In 2007, he was elected to the National Academy of Medicine, and has been active in multiple initiatives of the National Academies. As an ardent champion for the well-being of the nation’s health professions workforce, he currently serves as co-chair of the National Academy of Medicine Action Collaborative on Clinician Well-Being and Resilience. Dr. Kirch also is a member of the U.S. Department of Veterans Affairs Special Medical Advisory Group and the Board of Regents of the American College of Psychiatrists.

A psychiatrist and clinical neuroscientist by training, Dr. Kirch began his academic career at the National Institute of Mental Health, becoming Chief of the Schizophrenia Research Branch, serving as the Acting Scientific Director in 1993, and receiving the Outstanding Service Medal of the United States Public Health Service. A native of Denver, he earned his BA and MD degrees from the University of Colorado, and in 2002 received the Silver and Gold Award from the University of Colorado Medical Alumni Association.

Learn more about the Gold Foundation Board of Trustees and its mission.

Maureen A. Strafford, MD, was a champion of humanism in healthcare and a beloved friend and supporter of The Arnold P. Gold Foundation and its founders, Arnold and Sandra Gold. … chevron_right Read more

Dr. Nancy Oriol to be honored with the 2019 Pearl Birnbaum Hurwitz Award

Gold Foundation President and CEO Dr. Richard Levin introduces Anna Quindlen, before she is presented with the 2019 National Humanism in Medicine Medal, on June 13, 2019, in New York … chevron_right Watch