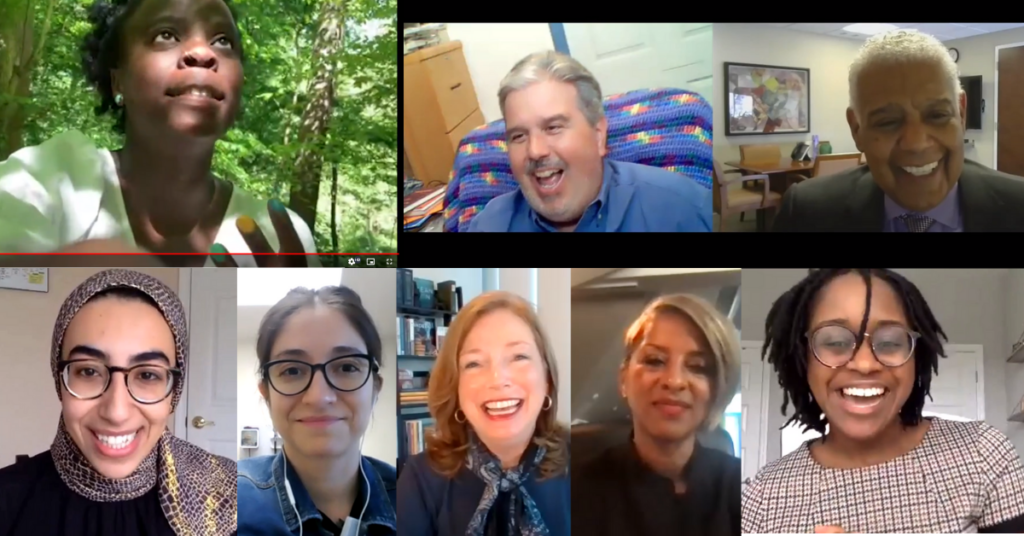 The Gold Foundation held its conference completely online, something that “only 15 months ago not one person in this audience ever imagined doing,” said Dr. Richard I. Levin, Gold Foundation President and CEO. “But, you know, humanism happens everywhere, and if this year has taught us nothing else it is that we must connect and that we can connect through the miles and the time zones, through all the barriers.”

Barriers – of the pandemic, of racism, of bias – were at the forefront of the gathering, which grew out of the Gold Humanism Honor Society’s 2021-2022 National Initiative of the same name as the conference. Hosted by the GHHS, the conference was open to all.

The conference platform opened on April 26 with prerecorded sessions, Art Gallery, and Poster Hall available to watch or visit anytime. May 6-8 featured live networking sessions, keynote addresses, live Poster Sessions, panel discussions and more, gathering the Gold community together. Most attendees were from the United States or Canada, with several representatives from GHHS chapters in Lebanon and Israel. All sessions were recorded and will be available for registrants until August 1.

The dual pandemics of COVID-19 and racism were seen as inextricably intertwined throughout the conference.

This was clearly visible in a panel led by Elizabeth Mensah, a rising fourth-year medical student and President of the Gold Humanism Honor Society chapter at Emory University School of Medicine. The panel discussion was devoted to the history of Emory and nearby Grady Memorial Hospital, two institutions that were founded on plantation land where people were enslaved.

Ms. Mensah introduced this history with a simple graphic illustrating how COVID-19 vaccination sites in the Atlanta area are overwhelmingly centered in predominately white neighborhoods.

“We see a pattern here,” Ms. Mensah said. “So when we talk about inequitable vaccine distribution, we are talking about a structural issue rooted in a history of racism. What we want to do is make sure that we look at the history that underlies these structures so that we do not go ahead and repeat the cycle.”

The dual pandemics also came into sharp relief in an unforgettable piece of art that Dr. Quinn Capers IV, Professor of Medicine and Associate Dean for Faculty Diversity at University of Texas-Southwestern Medical Center, displayed in opening his keynote address on the final day. 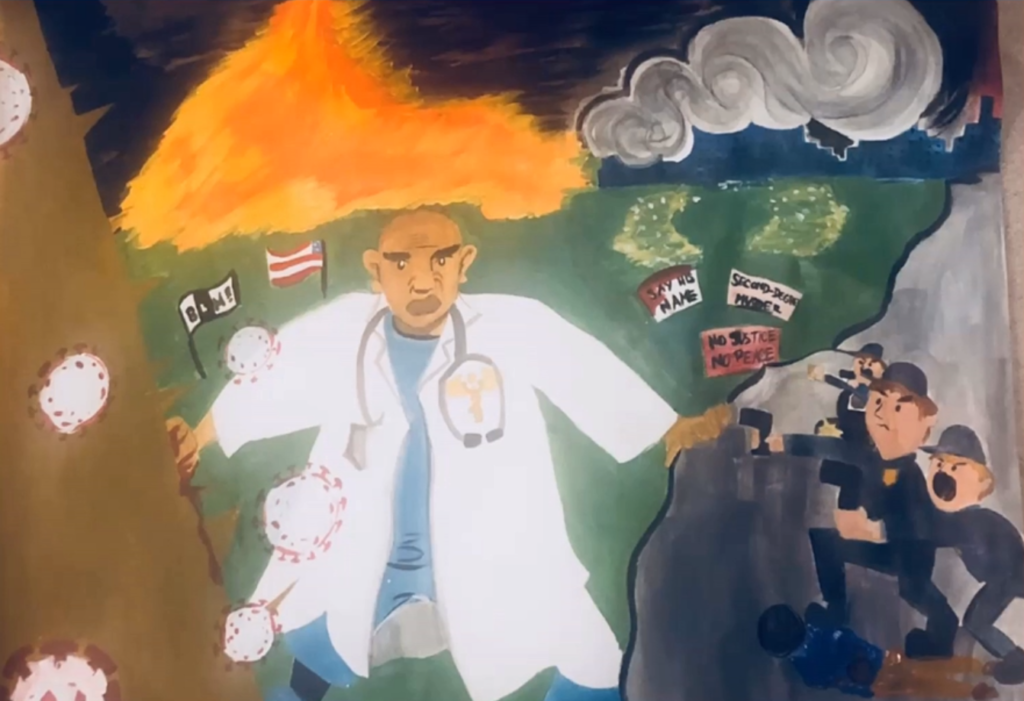 “One Man: Two Wars” by Christian Capers was the cover of Academic Medicine in December 2020.

Throughout the conference there were calls to action and an emphasis that good intentions and a good heart were not enough: Action and persistence were critical to shift the future to be more humanistic, more inclusive, more diverse.

Or, in the words of Sheila Okere, a rising fourth-year medical student who is President and founder of Ohio State University’s Physicians for Human Rights chapter: “I didn’t want this to end in a moment or a discussion. I want this to be a movement engrained in our community and our nation and with our children and their children.”

To that end, many of the presentations were not just inspiring emotionally, but served as practical guides. The speakers shared lessons learned while developing their work – from the big visionary ideals to the small stuff you really do have to sweat to make happen.

“We don’t do this in a vacuum, we can’t do this in a vacuum, so leverage your resources,” said Dr. Dinali Fernando, an emergency department physician and director of the Libertas Center for Human Rights at Elmhurst Hospital in Queens, New York. The Libertas Center works with refugees who are survivors of torture and who are seeking asylum in America. Dr. Fernando received the Gold Foundation’s 2018 Pearl Birnbaum Hurwitz Humanism in Healthcare Award for her work. She spoke on the panel “Advocacy and Grassroots Change” with four other past Hurwitz Award recipients.

In several sessions, discussion centered on creating safe spaces in medical institutions for people to speak out and work for change, guarding them from repercussions from those in power.

“It has to change, but it has not changed yet,” said Dr. Veda Johnson, Professor in the Department of Pediatrics at Emory University School of Medicine and 2017 Pearl Birnbaum Hurwitz Humanism in Healthcare Award recipient. This generation has “to pick up the mantle and take it much farther than we ever have – and we have to protect them.”

First-year medical students at Hackensack Meridian Medical School took this philosophy of action to heart when they noticed the medical images used in one class were mostly of white patients and did not represent the diversity in the community – even when the patients disproportionately affected by a disease were Black. This lack of accurate representation, they said, would affect their ability as future doctors to provide the best medical care to all of their patients. They set to work, with faculty support, to address the problem. The students have already created a growing “toolkit” for use in the medical school curriculum.

The project was not put on some nice-to-have list for the future. It was needed now and so it was addressed immediately.

In introducing the session, Dr. Tadé Ayeni, Director of the Office of Diversity and Equity at Hackensack Meridian School of Medicine, shared the context that years ago, the standard notion of “diversity” meant that minority and marginalized populations had to find a way to adjust and make themselves fit into the prevailing structure. But now, if we are to progress, it means that institutions themselves need to adjust and figure out how they are unintentionally disadvantaging whole populations – and then, fix it.

The conference sparked new ideas and collaborations, sometimes just in the course of asking a simple question.

For example, in one session, medical student and faculty member presented on their project. One of the attendees asked whether nursing students were also involved in the project. There was a pause. The presenters were clearly realizing that although this interprofessional collaboration had not happened yet, it was a great idea. They thanked the questioner for the suggestion and said they would move on it. 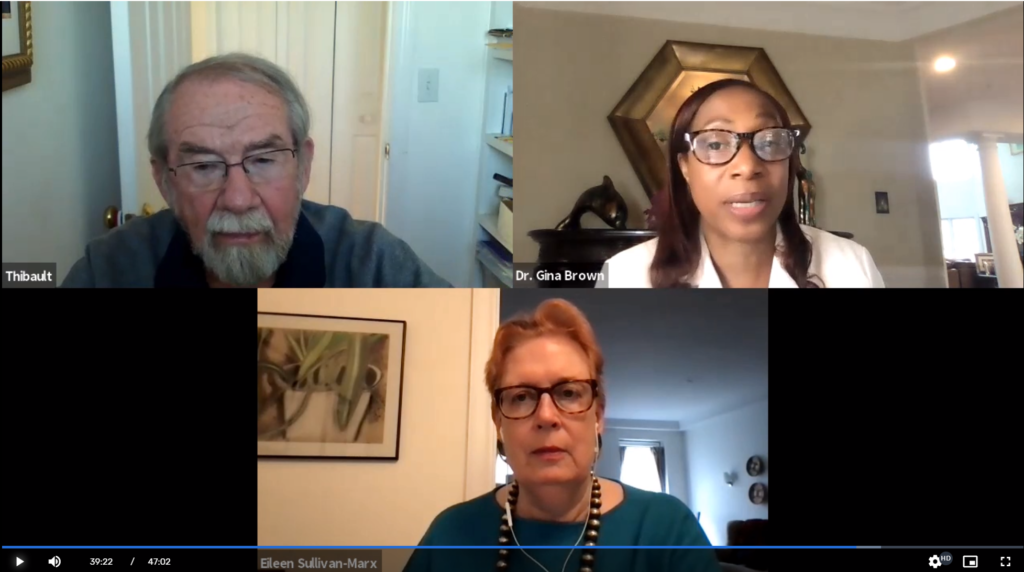 From top right, Nursing Deans Dr. Gina Brown of Howard and Dr. Eileen Sullian-Marx of NYU, who is also a Gold Trustee, joined with Gold Trustee Dr. George Thibault in a keynote address on May 7 around “Partnership with HBCUs.”

Interprofessional collaboration – especially bringing nurses and doctors together in elevating humanism – has been a deliberate focus of the Gold Foundation. The nonprofit organization was created in 1988 by Drs. Arnold P. Gold and Sandra Gold with the first programs rooted in medical schools, such as the White Coat Ceremony. The foundation has since been expanding several of its programs into nursing schools and added nursing leaders to its Board of Trustees.

One such Gold Trustee, Dr. Eileen Sullivan-Marx, who is the Dean of the NYU Rory Meyers School of Nursing, joined up with Dr. Gina Brown, Dean of Howard University’s College of Nursing and Allied Health Professions, for a keynote address titled “Partnership with HBCUs: Challenging Systemic Racism in Health Education, a Nursing Story” on May 7. The two nursing schools, one a HBCU (Historically Black Colleges and Universities), and one a PWI (Predominantly White Institution) paired up to expand opportunities for their students.

Beyond reaching across interprofessional boundaries, several panelists urged healthcare professionals to get out into the communities they serve in order to learn.

“The brilliance you are mining from the people is held by the people,” said Dr. Nancy Oriol, an anesthesiologist who is Faculty Associate Dean for Community Engagement in Medical Education at Harvard Medical School.

In a session on grassroots advocacy, Dr. Oriol explained the importance of community in the process of starting The Family Van, which provides mobile medical care in the streets of Boston.

“It wasn’t going to the computer and reading 1000 articles,” Dr. Oriol said. “It was going to the barbershop and having a great conversation… There are so many cool ways to get that knowledge.”

The students at Ohio State University’s medical school learned this as well working with incarcerated women during their House Call project.

“We just talked like we were friends. We were colleagues, we were equals,” said Ms. Okere. “We talked about their experience inside and outside of healthcare. It was not as if we were looking through a glass wall. We were breaking that glass wall and were in the room with them. We addressed our ignorance and from that we found empathy. This was the beginning of what was healing on both ends.”

Included in the panel were two women who were part of the project who had been or were currently incarcerated.

Both said how much they appreciated the project for recognizing their humanity, their insights, and the contributions they could still make to the world. When thanked by a presenter for taking part in the panel, one of the women said, “I appreciate the fact that you asked. Thank you very much. And tell everybody I said hi.” 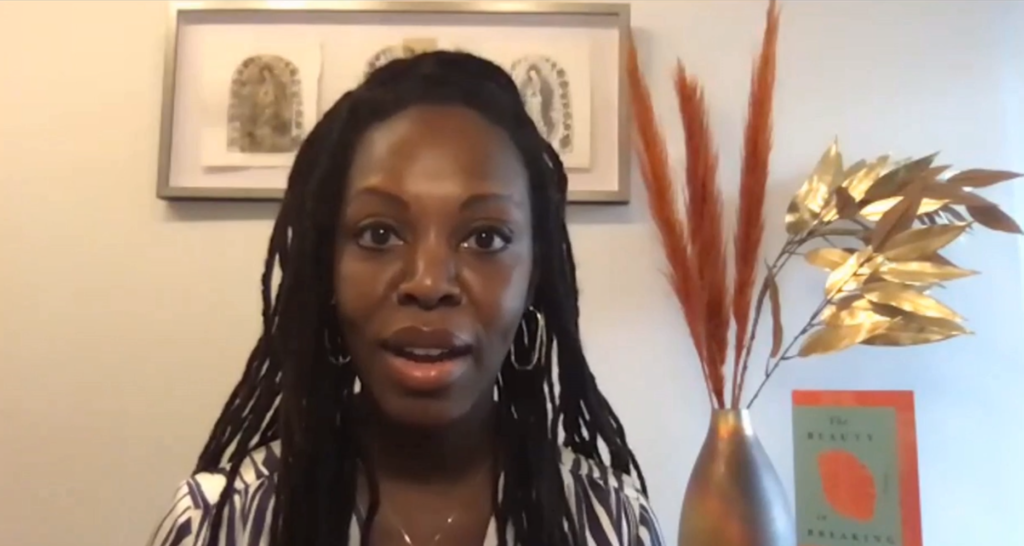 Dr. Michele Harper, author of the bestselling “The Beauty in Breaking,” spoke on the House Call panel.

Part of the House Call project included a book club that discussed The Beauty of Breaking, a bestselling memoir by Dr. Michele Harper, a GHHS member.

Despite not knowing much about the House Call project initially, Dr. Harper said she “took a leap of faith” and agreed to join the book club for many of the same reasons that led her to write the book and become an ER doctor in the first place.

“It gets easy to say, ‘Well the system is bad, the structure is bad.’ But we’re part of it. We have some agency in it, and should we choose to heal ourselves we can then choose to be a part of a structure that heals other people,” Dr. Harper said. “It is my goal to radically reimagine these structures because I still envision a day – and I’m not naïve – but one day, I envision structural equity. That is possible where the norm, the default, hopefully, is that we value each other and we all have the opportunities to live the lives we deserve.”

Dr. Wayne Riley, President of SUNY Downstate Health Science University in Brooklyn, said Dr. Martin Luther King’s Letter from a Birmingham Jail, written while he was incarcerated for several days in 1963, was a good “starting point” for what is needed now. Dr. King’s open letter was his answer to white moderates in the 1960s that he and the civil rights movement were pushing too hard and too fast for change.

Dr. Riley was born in a segregated hospital and has risen to top of the medical profession. He is a Gold Trustee and Secretary and the Chairman of the Board of the New York Academy of Medicine, the first African American Chairman in its 174-year-old history. He will also be awarded the Gold Foundation’s National Humanism in Medicine Medal on June 10th, along with Dr. Anthony Fauci and Dr. Eric Topol.

Dr. Riley echoed King nearly 60 years later, that despite all the progress, this was no time to rest because “systemic racism is still an affliction in the house of American medicine.”

“It’s not enough to just feel in your heart these things are wrong,” Dr. Riley said during a keynote fireside chat with Dr. Levin, titled COVID-19 and The Racial Reckoning. “You have to – whatever setting you’re in – address them.”

The Gold Foundation is excited to announce that the books on our annual Summer Reading Lists for Compassionate Clinicians are now available to order through a Gold Foundation Bookstore on Bookshop.org. 10 percent of every purchase from that bookstore goes to support the nonprofit Gold Foundation, and a matching 10 percent goes to independent bookstores.  The … chevron_right Read more