“Zero in on Individual Skills and Interests”

These were three “pearls” of advice that psychiatrist Dr. Mark T. Garry shared at the Organization of Student Representatives (OSR) Luncheon and Ceremony, hosted by The Arnold P. Gold Foundation and the Association of American Medical Colleges (AAMC) on November 2, 2018. As the 2018 Arnold P. Gold Foundation Humanism in Medicine Award honoree, Dr. Garry presented his insights on how to bring humanism into daily practice. 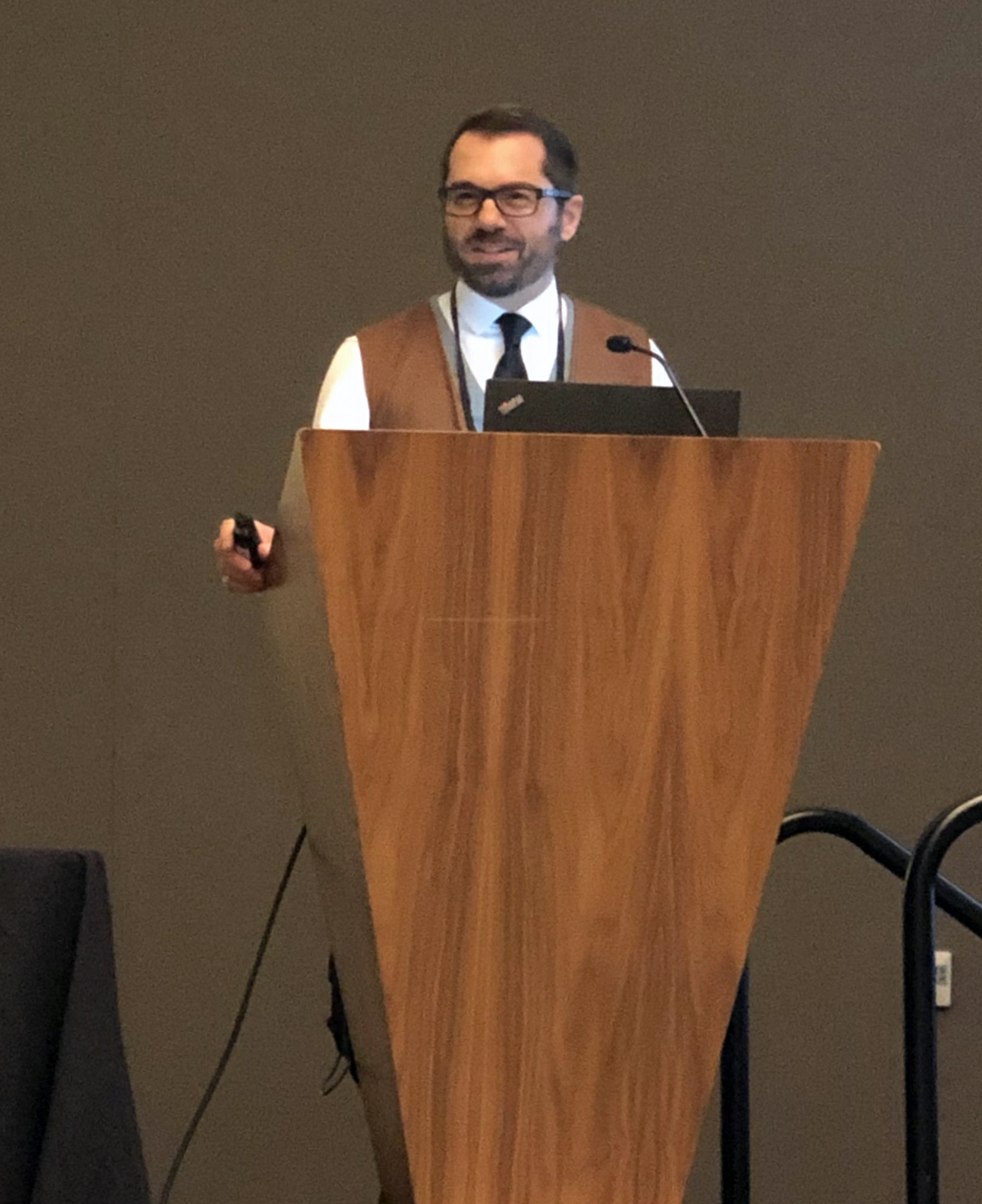 Dr. Mark Garry, recipient of the 2018 Arnold P. Gold Humanism in Medicine Award, shares his advice during a ceremony to honor his award on Nov. 2, 2018, in Austin, Texas, at the AAMC Annual Meeting.

The luncheon presentation was part of the 2018 AAMC Annual Meeting, which brought together more than 4,000 medical students, faculty members, deans, and other leaders to Austin, Texas, to discuss the latest issues in medical education. The AAMC OSR joins with the Gold Foundation each year at the conference to honor a faculty member for exceptional humanism. This award is particularly special because the nominations all come from students and the student leaders of OSR make the ultimate selection.

Dr. Garry is Assistant Professor of Psychiatry at the University of South Dakota Sanford School of Medicine and head of psychiatric education at the Rapid City Regional Behavioral Health Center. Dr. Garry has deep experience caring for Native Americans, including 9 years at the Sioux San Indian Hospital in Rapid City for 9 years. He speaks widely on suicide prevention and has served on the Suicide Prevention Committee for Rapid City and the Governor’s Task Force for State Suicide Prevention. The U.S. Department of Health and Human Services honored his work in telemedicine with the Secretary’s Award for Distinguished Service in 2006. 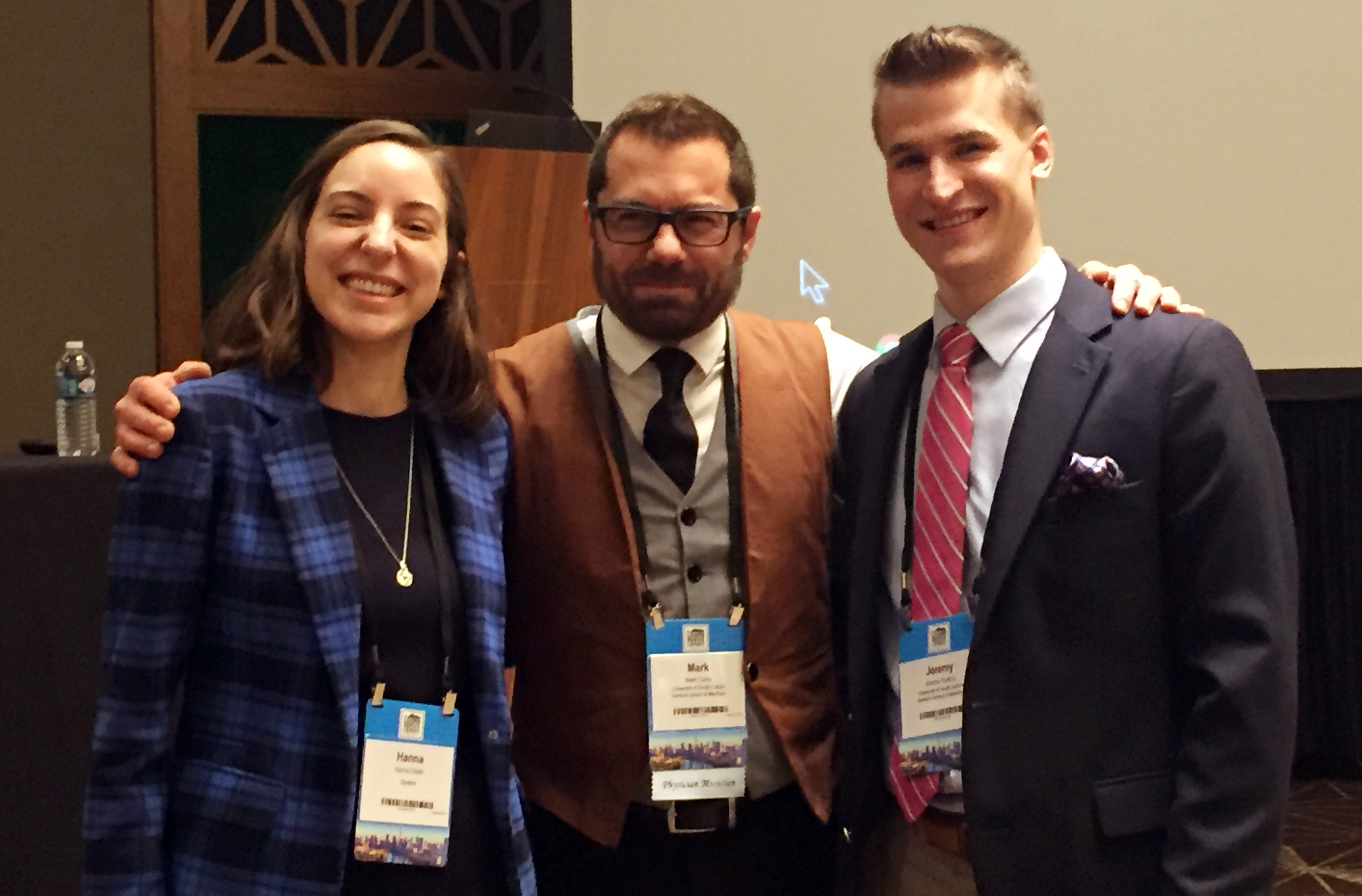 She added: “He practices what he preaches, and he preaches balance in life, and so he is also a DJ in his spare time.”

AAMC President Dr. Darrell Kirch gave brief remarks, congratulating Dr. Garry and urging the medical students and everyone in the room to protect humanism in medicine. “In a world that is marked by far too much incivility, bordering at some points on inhumanity, I think in academic medicine, and in medicine writ large, healthcare writ large, more than ever we need to be the shining example of humanity’s best qualities,” he said. 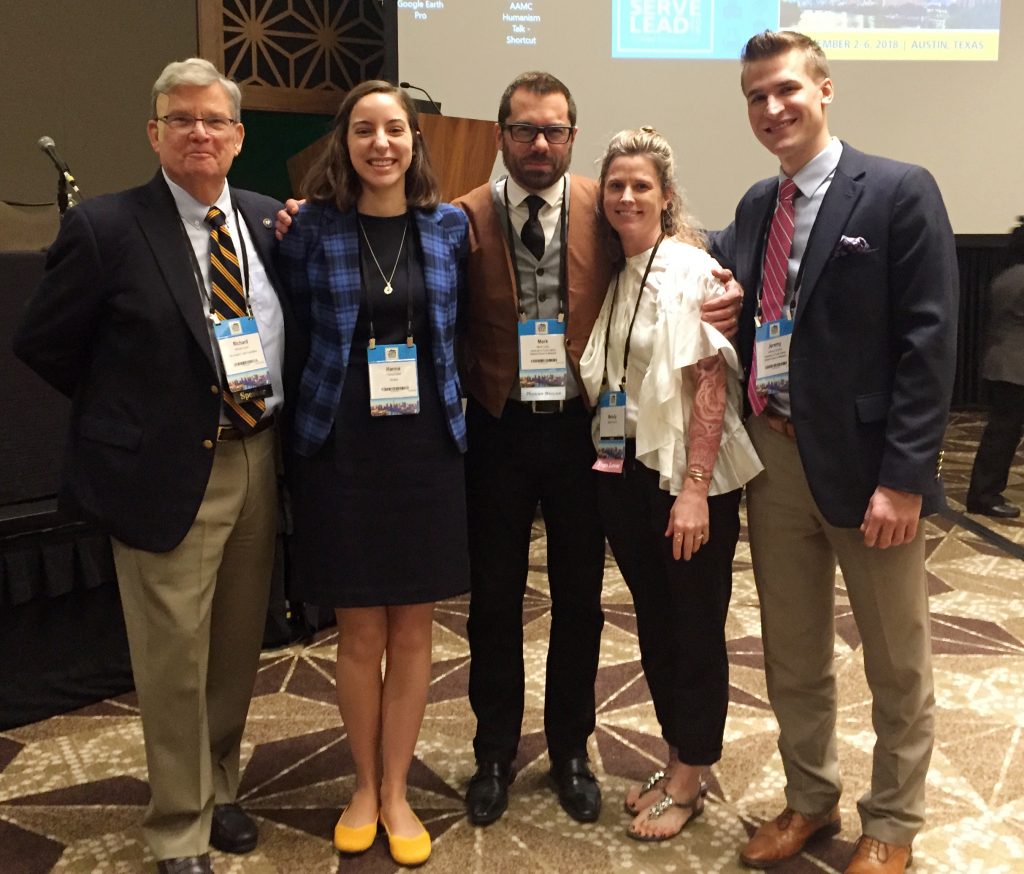 Dr. Richard I. Levin, the President and CEO of the Gold Foundation, also spoke, and began by thanking Dr. Kirch, who is stepping down from the AAMC presidency next year: “He has been a transformational leader, unafraid, able to create consensus across the country, and speaking firmly and wisely to power.”

Dr. Levin drew out the significance of this annual award: “By honoring the exemplars of humanism in medicine like Dr. Garry, we collectively send the very important message to all of medicine that how we treat our patients, our colleagues, and our students really matters.”

Then Dr. Garry took the stage in a wide-ranging talk. He outlined his practice and the particular challenges of the region in South Dakota where he works, which faces some of the worst rates of suicide in the country.

He offered many “pearls” of how to bring humanism into daily medical practice. He began by emphasizing that we are all people, physicians and patients alike: “You’re a Human. I’m a Human.” 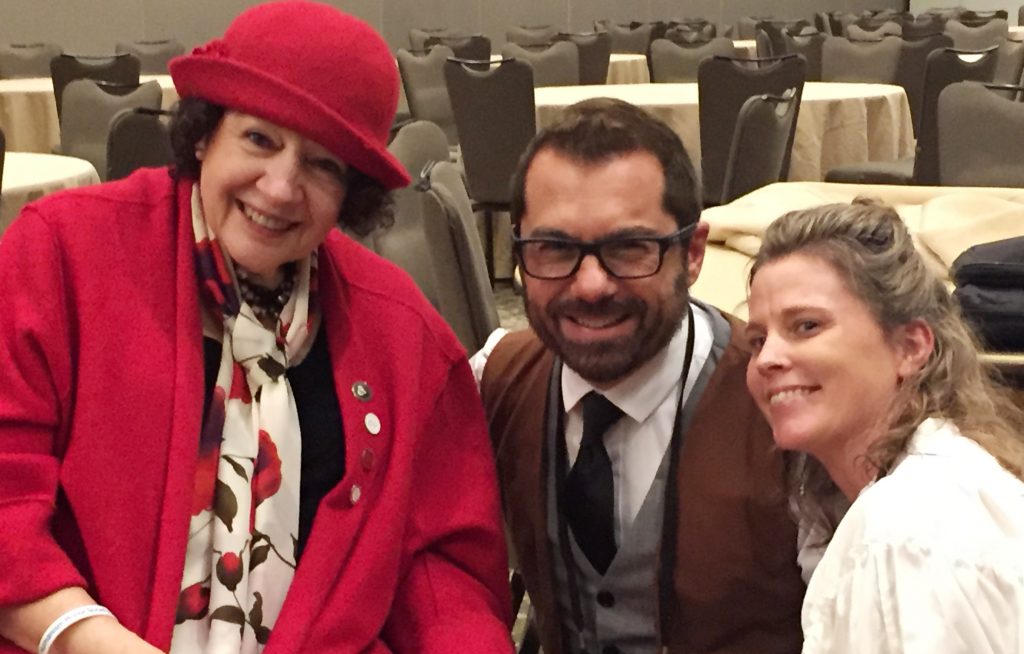 Dr. Garry quoted late-night talk show host David Letterman after he was asked about anti-transgender legislation: “Look, you’re a human, I’m a human. We’re breathing the same air. We have the same problems. We’re trying to get through our day. Who the hell am I to throw a log in the road of somebody who has a different set of difficulties in life?”

Dr. Garry examined how connecting is not always easy: How did you sit with someone who has just lost someone to suicide, or who has gone through a divorce? How do you connect with them?

“Rather than judging them or trying to immediately go into what it would feel like to you to lose someone, you have to just be there in that moment and be present. And that’s a really hard thing to teach. But I think that the students have to mostly learn that by watching through examples,” he said.

Dr. Garry shared a montage of emotional scenes of connection in movies such as “The Foreigner,” “Hostiles,” “Moonlight,” and “Three Billboards Outside Ebbing, Missouri.” Films can help teach self-awareness and also emotional awareness, said Dr. Garry: “Sometimes just a simple movie clip can show you how people engage in these deep, dark moments in child and adolescent psychiatry and psychiatry in general.”

Through funny stories, examples from his colleagues, and inspiring anecdotes about patients, Dr. Garry brought to life many more “pearls,” such as “When Nobody is Watching,” illuminating how important it is to always treat everyone with respect, whether other people are present or not. 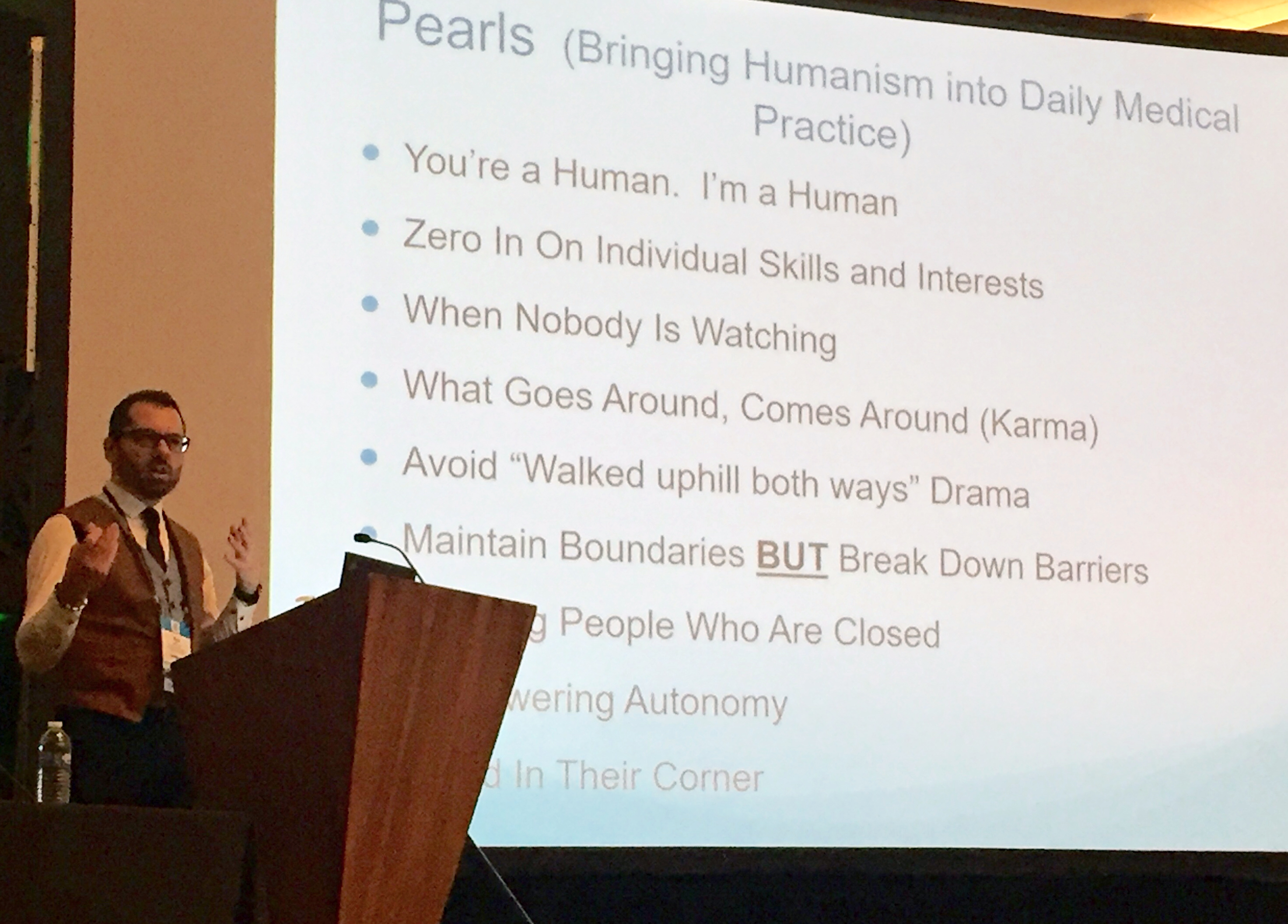 Dr. Mark Garry, recipient of the 2018 Arnold P. Gold Humanism in Medicine Award, shares his “pearls” of wisdom on Nov. 2, 2018, in Austin, Texas, at the AAMC Annual Meeting.

He might say to the custodian mopping the floor, “The floor really looks clean today.”

“Just that simple thing seems to light up people and make them feel better. I try to do that with all people,” said Dr. Garry. “And students are often with me, so they see me doing that – again, modeling that type of behavior.”

He emphasized the importance of connecting with patients and with medical students, finding an opening – for example, a physician could ask about someone’s interest, or notice a sticker or a symbol and draw out what it might mean to the other person.

During the question period, several students asked about how to connect in difficult moments with patients, patients’ parents, or colleagues.

“As much as you can, be yourself in that moment and emulate what you want to see,” Dr. Garry advised.

In working with angry patients, “I’ve been punched, I’ve been thrown to the ground – how do you still stay human and present in that moment? I think at that moment, I have to put myself in their shoes. Where is their pain coming from? Where are they at? What is their point of view?”

“Maybe they are there to teach me – how do I deal with someone who is angry? Maybe they will be one of my greatest teachers,” said Dr. Garry.

Read a summary of more Gold highlights at the 2018 AAMC Annual Meeting.