This post was originally published on here on The Negative Space, created by Allison Breininger, a Caregiver Advocate with over 20 years experience in teaching, training, directing, coaching, and creating content in the realm of education. 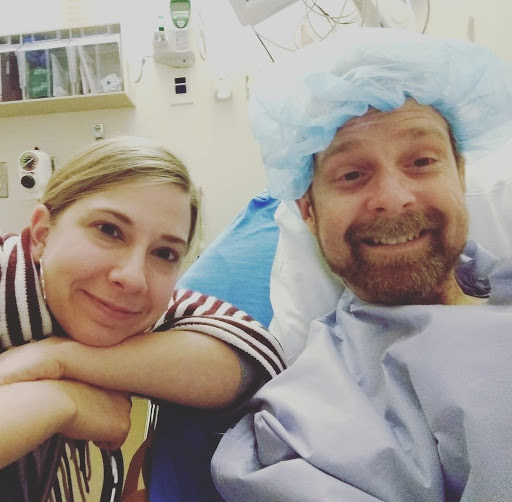 Allison has been a caregiver for her husband, Sean, since 2010 at the onset of his battle with a rare disease. She recently created a non-profit, The Negative Space the inspiration for which came through her firsthand insight into how caregivers often find themselves in the negative space: vital yet overlooked and unsupported. Inspired to make a difference, Allison created The Negative Space as a way to magnify the realities of caregiving, provide direct services to caregivers and educate and empower those who support them with concrete tools and strategies. Among The Negative Space’s offerings are one-on-one coaching with Allison, speaking engagements, “I’m Part of the Story” gift boxes for caregivers, resources, and much more.

Allison and Sean live in St. Paul, Minnesota, with their teenage daughter, Maya, their two cats, Hattie and Hazel, and their pandemic puppy, Winston.

“Thank you for giving us something interesting to think about,”

said the doctor,
the one who hadn’t introduced himself when the entourage walked into the exam room,
but made it quickly known in other ways that
he was a surgeon.

“I talked to my colleague at a different institution and he said that in all his years he’s never even heard of someone with Fanconi anemia that is as old as you,”

said another,
a hint of thrill in his voice
at his good fortune
to be working on such a rare case.

said yet another,
meaning that they are essentially using their best guesses to make a plan
and also
potentially using this phrase to cover their butts
if things do not go well.

“There is no protocol for this,”

we know
and we hear
again
and again.

we grow accustomed to hearing most sentences begin.

“We’re going to track everything we do really carefully, so that we can learn from how it goes,”

another one says,
which comes out sounding more like,

“We’re going to write a really great article when this is all over.”

“Since we’ve never tried this before, you will be the…(stops himself before saying ‘guinea pig’) test case.”

In every one of these conversations with practitioners who recognize that the person in front of them is rare, special, one of a kind, the sort not even written about in textbooks,
I want to tell them that it is true,
that he IS unlike anyone they have ever treated or read about,
but that his exceptionality has little to do with the way his DNA fails to repair itself after injury.

I want to tell them
that he and I were high school sweethearts,
that my parents met his parents when he was in the womb and I was not yet conceived,
that he raised money for orchestras and public radio and art museums,
that he traveled the world to raise support for orphans in Latin America and the Caribbean,
that he and I fought for more than two years to adopt our daughter from Haiti,
that she is now twelve and destined to be the next big thing on the music scene and that he is her biggest fan,
that he regularly uses his scant amounts of energy to play chess or badminton or wrapping paper roll battles with her,
that he has a brand new niece and Goddaughter who makes his face light up,
that at any social gathering, he ends up sensing who the person in the room is who needs to talk, and gives them his energy and his time,
that even in these days of non-stop appointments, treatments, and decisions, he finds time to counsel and support others in his life who are struggling with hard things,
that every time he meets with a counselor, pastor, or social worker, the visitor leaves the session feeling even more uplifted, supported, and enlightened than the patient,
that he is the most incredible husband, father, son, brother, friend, human they will ever encounter,
that it is his enormous heart full of endless love
and his unrelenting strength and perseverance
that they should be in awe of, geeked out by, researching, studying, writing about and trying to save,
that he is
SO MUCH MORE
than
a rare case,
a mystery to be solved,
a medical breakthrough to be achieved,
an article to be written,
and
that they will never,
ever
have another patient
as rare
as Sean.