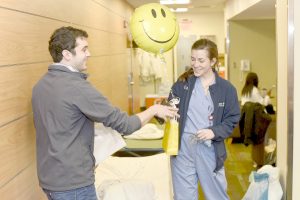 In the face of challenges posed by a pandemic and racism, the White Coat Ceremony underscores the importance of our shared humanity

“The white coat signifies an expectation of medical knowledge and skills, mutual respect and humanity,” said Steven Zweig, MD, dean of the MU School of Medicine. “Recently it has also come to symbolize the selfless commitment of health care workers during the current viral pandemic and making a commitment to fighting racism in medicine.”chevron_rightRead more

Marie Perillo, MSN, RN, CPXP is a passionate nurse in healthcare for 35 years. Most recently, she has worked in post acute care as the Chief Patient Experience Officer for … chevron_right Watch