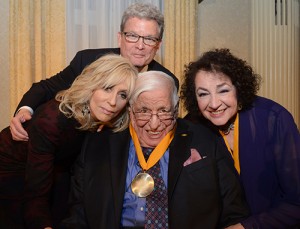 The evening was Emceed by activist and humanitarian, Tony and Emmy-Award winning actress, Judith Light, who began the festivities by reflecting on the power of relationship-centered healthcare: “If you humanize the healthcare experience for the patient and the professional and create a trusting relationship, the experience becomes transformative and, inevitably, improves patient results. That is a truth we have known for 2000 years of medical history.”

Dr. Jordan Cohen, Chairman of the APGF Board of Trustees, introduced the extraordinary honorees:

In a remarkable statement of partnership and shared commitment to collaborative compassionate care, Dr. Richard Levin, President and CEO of APGF, invited onstage the deans of nine of the NY/NJ metropolitan area medical schools. All were inducted into the Gold Humanism Honor Society in recognition of their institutional and personal alliances with The Arnold P. Gold Foundation.

A special appearance by Carissa May, a medical student member of the Gold Humanism Honor Society, was a true highlight of the evening. Carissa spoke passionately of a relationship she formed with a patient she was caring for during her clinical rounds. They shared a love of singing, and, just as she had done for her patient, Carissa enchanted the crowd with a poignant rendition of “Amazing Grace.” 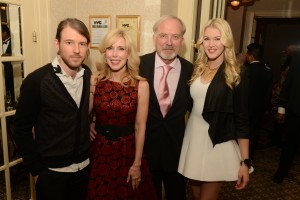 The Glen Campbell family (Glen’s wife Kim, and children Cal, Ashley and Shannon) demonstrated that not only does talent run in the Campbell family, so do compassion, strength, and perseverance.  While being honored for their courage, honesty, and advocacy on behalf of patients, Ashley and Shannon brought the audience to tears with a performance of Ashley’s original song, “Remembering”  The song, which will be released next year and which was written for the I’ll Be Me film during the progression of Glen’s struggle with Alzheimer’s, features the refrain, “Don’t you worry daddy, I’ll do the remembering…” Film director, James Keach (Walk the Line) commended the family for going public and raising awareness for the disease, and he lauded the Gold Foundation for its quarter century of dedication to fostering humanistic and empathetic patient-centered care. 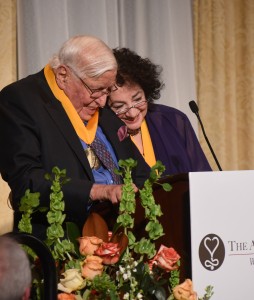 The evening’s pièce de résistance was the final awards presentation to Drs. Sandra and Arnold Gold. Dr. Darrell Kirch, President and CEO of the Association of American Medical Colleges, introduced the couple, who have devoted over 25 years to promoting the foundation’s work, describing them as visionaries and thanking them for their tireless dedication to ensuring that humanism remains at the heart of American medicine. The Golds’ compelling and moving remarks emphasized how much the mission of the Gold Foundation means to them, and, most importantly, about how their vision never would have been realized without the assistance and collaboration of so many dear friends and colleagues.

We would like to thank our dedicated planning committee for ensuring the success of the evening along with our community of friends and donors for their tremendous generosity.  This Golden Thread Gala raised over $900,000 for the Foundation, and we are so appreciative of the gifts that have continued to come in to support our important work.