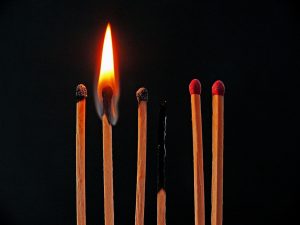 “It won’t be the last sacrifice you make for medicine.”

These were the words my surgical intern said between yawns
as I expressed regret at having to miss a distant cousin’s wedding. The digital wall-clock read a blurry 3:15 AM as we sat together in the on-call room, the coffeemaker dripping black gold into the pot.

She had three pagers affixed to her scrub pants which would
beep intermittently in turn, signaling anything from an order that had been overlooked in the electronic medical record to a patient arriving by ambulance who would need urgent attention.

I was the medical student assigned to the service she was covering, which meant that I was her shadow cast by the fluorescent hospital lighting. For two weeks, I watched as she glided gracefully through the wards, responding to emergency after emergency with confident poise. She taught me a lot about taking care of people who had just undergone surgery over the 150 or so hours we spent together over those two weeks.

In the silent moments when a pager wasn’t chirping, she would take me aside and teach me why she chose a specific medication for Mrs. Jones, or the reason we couldn’t perform a certain operation for Mr. Rodriguez. Then, the familiar beeping noise would sound, and off we would go. For 150 hours, I watched her work day and night, and I listened carefully as she taught me how to take care of sick patients.

Sometimes, the lessons were not easy to bear. Some decisions can be hard – or even impossible – to make. Throughout medical school I watched even senior physicians walk out of certain encounters noticeably heavier from the gravity of their discussions.

After participating in clinical medicine during a year of clerkships, I find it unsurprising that, in one study, almost half of US physicians reported symptoms of burnout. Often cited reasons for burnout included excess administrative work and a lack of face-to-face time with patients.

This isn’t just a problem for physicians. It’s been shown that physician burnout negatively affects clinical outcomes for patients. We also know that dissatisfied physicians are more likely to make mistakes in prescribing. With both physician and patient wellness at stake, it seems obvious that something must be done to address the problem.

I sat down with my surgical intern to get her thoughts on burnout in a coffee shop near the hospital, this time by the light of day. She looked unfamiliar in street clothes, out of the blue scrub uniform that now seemed cartoonish in my memory. I asked her how she dealt with the demands of a surgical residency.

The justifications for her resilience were unexpected. She described growing up in a family that pushed her to read fiction. She talked about how she attempted to view each patient as an individual with a rich life story, rather than another case of appendicitis. She spoke about how her background in theater helped her to understand subtleties of communication from people, and how that made her work more meaningful. I also learned that she had delivered a baby just two months before we were on service together, and that somewhere between the 150 hours we spent together, she had been pumping breast milk for her infant. She talked about how encouraging her partner and family were, and how privileged she was to have emotional and psychological support to steady her in uncertain moments.

Her experiences ring true with the evidence on burnout. High levels of empathy are associated with lower rates of burnout in physicians and nurses. It is also true that the ability to provide quality care is a major driver of satisfaction for physicians. It seems that burnout intensifies when physicians who want to provide quality care to their patients are prevented from doing so by infrastructural barriers. Hope for the future lies in the fact that advocates have suggested adding a fourth aim of improving the work life of healthcare providers to the Institute of Healthcare Improvement’s Triple Aim framework for optimizing healthcare.

As we finished our discussion and prepared to part ways, my resident (now friend) remarked that she would be missing her niece’s middle-school rendition of Annie in order to head back to the hospital to take call that night.

“It’s not the last sacrifice you’ll make for medicine,” I said jokingly.

She smiled. “It’s not the last sacrifice I’ll make for people.”