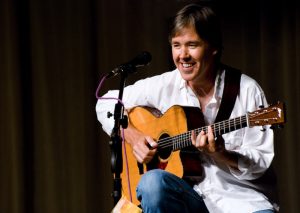 We knew right away we were on to something.  As an entertainer, my husband knew how to “read a room”—how to tell if he was having an impact.  After years of touring the world both as John Denver’s guitarist and as a solo performer, Pete Huttlinger knew when he was connecting with an audience.  But this was an audience that was a little outside the norm.

Pete was a world-renowned guitarist who was invited to play Carnegie Hall three times, Eric Clapton’s Crossroads Festivals more than once, and who recorded and was featured on countless albums.  He was always a rare caliber of guitarist, but we discovered that he was also a medical rarity.

I know if you’re reading this you are likely in the health professions.  You can confess it here, you know I’m right—you often hide your sense of humor.  It’s important to be serious, but in order for Pete to connect and feel safe, he had to make his doctors laugh.  It was rarely an easy task, but he was relentless.

He would look at me as we’d sit in any number of examination rooms and wiggle his eyebrows.  That meant he was going to work hard to get his doctor-of-the-moment to loosen up and laugh.  Some were more difficult than others, but they all succumbed—and they succumbed to their feelings of hope and caring and even love for Pete.  These connections helped him trust those who literally held his life in their hands.  It helped him heal, and it helped him to speak up when he was uncomfortable with the directives he was sometimes given.

So Pete was an entertainer on and off stage and he could read a room.  After he recovered from his VAD surgery, he began speaking to large groups of physicians and other medical professionals.  He shared his story of resilience in the wake of catastrophic health issues.  Right away, we noticed something unusual.  These clinicians who, face it, can be intimidating with their presence and expertise, melted—sometimes to the point of tears—as they shook his hand and told him what his story meant to them and how it had altered their point of view.

“I never get to see my patients after they recover.”

“I am exhausted, but you’ve renewed my energy.”

To see a guy who had suffered a major–initially paralyzing–stroke, heart failure, and a VAD implantation, walk out on stage, make jokes, speak from his heart, and play his butt off really meant something to these clinicians.  We determined then and there that we wanted to gear all of our speaking engagements to medical professionals.

Always having lived in major metropolitan areas, Pete was cared for by world-famous doctors at Stanford, Vanderbilt and Texas Heart Institute.  A patient with such a unique anatomy required attention from other unique individuals. When I say Pete was cared for by these men and women, I mean they really cared for him.

Pete spent an enormous amount of time with such an array of physicians; relationship didn’t always come easy.  He had a deep conviction that they needed to get to know him, and vice versa. The way you got to know Pete wasn’t through his bizarre anatomy, it was through his music and his sense of humor.

Pete’s last speaking engagement on November 12, 2015 was at Baylor Scott and White in Temple, TX.  He spoke at Grand Rounds.  The response was palpable and he told me that it was the best performance of his talk to date.  Four weeks later, on January 15, 2016 at Vanderbilt University Medical Center, my husband died from a brain bleed.

Many doctors at Vanderbilt stood vigil alongside me during the last days of Pete’s life.  And they came again to stand at his bedside when it was time turn off his life support.  Within an hour of his death I received calls from doctors outside Vanderbilt who had cared for him over the years and several came to celebrate his life with me during a ceremony 5 weeks later.  In numerous ways and on numerous occasions these selfless professionals had saved Pete’s life; they gave us many more years together than a bookie would have laid odds on.  They were there for Pete. They were there for me. Now it’s my turn to return the favor.

Grief is wicked.  It has caused me to lose some of my passion for my work as an entertainment publicist, but because of what Pete and I accomplished together, I feel driven to continue my outreach to as many physicians, nurses, social workers, and administrators as I can.  Together, Pete and I saw that telling the medical community our story of patient resilience, coupled with humanistic care, reconnects them to why they went into medicine in the first place.

If you are interested in having the “Pete & Erin Huttlinger Humanism in Medicine Series” travel to your institution, please contact Erin at erin@morrispr.biz. 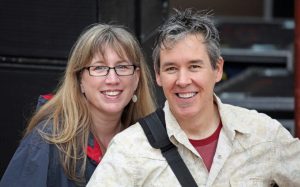 Erin Morris Huttlinger is an author and long-time music business professional. Alongside her late husband and famed musician Pete Huttlinger, she authored “Joined at the Heart: A Story of Love, Guitars, Resilience, and Marigolds,” a heartening account of their time together as Pete suffered a stroke, heart failure, and eventually, recovery over the course of five years.  Her blog, Bright Side Of The Road, ponders her path of resilience through grief.