Editor’s note: This essay is written from the point of view of Dr. Schueler.

“Pneumonia guy in room 24 claimed his nephew was picking him up this evening, but turns out that was a lie so I won’t be able to discharge him tonight.”

“Cirrhosis lady in room 35 told me she stopped drinking, but she reeks of alcohol.”

These two lines are representative of how we communicated about patients during my intern year of internal medicine residency. After a few months, I was effectively speaking the language. I was no longer a naïve medical student tip-toeing around the hospital; I was on the inside now, and part of that meant knowing the lingo. 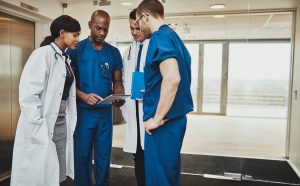 The medical lingo of your team can influence how you see patients and even the atmosphere of work rooms.

I never spoke to a patient in this way. And I think I was out of earshot when I switched to my insider lingo with members of the healthcare team.  But I began thinking about my patients as “pneumonia guy” and “cirrhosis lady.” It helped me organize their medical problems in my head.

Fast-forward to my second year of residency, when the words of a humanistic attending physician led to a significant change in the way I referred to and thought about patients: “We are going to have fun. We can make fun of ourselves. But we can’t make fun of the patients.”

Dr. Robert C. Lowe said this on his first day of taking over our inpatient general medicine team, and it hit me like a cold shower. Had I referred to patients using disrespectful terminology or tone in front of my medical students or interns? Were they walking around thinking of our sick patients as “pneumonia guy” and “cirrhosis lady”?

From that moment, I began instructing my teams to refer to patients in humanistic and respectful terms at all times, including in the work rooms.  We eliminated the term “sickler” and replaced it with “25-year-old gentleman with sickle cell anemia.” We replaced “fat” with “patient with obesity.” We stopped saying “another heroin junkie” and started saying “patient suffering from substance use disorder.”

I found that this change took much of the anger and frustration out of the work rooms. Instead of our team battling cirrhosis in an intermittently compliant host, we were helping a fellow human in her battle with cirrhosis. The atmosphere was more peaceful. More importantly, I felt confident we wouldn’t slip and use a disrespectful term around a patient or a patient’s family member if we stopped using this language entirely.

My colleague Dr. Elia E Acevedo-Diaz (a psychiatry resident physician at our hospital) and I (now a chief resident in internal medicine) have explored this further by asking our patients if they’ve ever been referred to disrespectfully or called a name by the healthcare team.  From the very first two patients we asked, this is what we found:

Patient 1: A 72-year-old African American male with multiple medical problems presented to us with a COPD (chronic obstructive pulmonary disease) exacerbation. We asked if there was ever a time when part of a healthcare team referred to him in a disrespectful way. He told us that about 10 years ago, two healthcare providers came into his room speaking Spanish to each other while looking at him and laughing. He was sure they were making fun of him. He remembered feeling like they might hurt or even kill him. He was too scared to discuss this with other members of his care team because he thought he might be harmed. This was the first time he had ever told anyone about this experience.

Patient 2: A 38-year-old Caucasian female with depression, anxiety, and history of intravenous drug use presented to us with excruciating lower back pain. Both my colleague and I saw her during her hospital stay. She told us she heard multiple members of the healthcare team referring to her as the “screaming lady.” This made her feel even worse. She started crying as she recounted the name she was called. She told us she hadn’t meant to scream, but she had been in pain and was scared.

Even among health care professionals, we refer to ourselves and our colleagues by the medical services we represent (i.e., “Are you pulmonology? I need you to see this patient”). In a Journal of General Internal Medicine essay, Dr. Andrae Vandross describes how this practice threatens our individual humanity, and questions how we hope to treat our patients as human beings when we don’t consistently treat ourselves that way.

I think back to shadowing a family medicine doctor prior to medical school and having the privilege of meeting some of his patients. I thought of these patients as people and would have never dreamed of referring to them by their illnesses, physical traits, or other de-humanizing terminology. Where did that break down?

One study found that empathy for patients among first- and second year-medical students is already waning as they advance through their clinical years prior to the start of residency. Does the novelty of caring for fellow humans wear off that quickly? Is de-humanizing patients a shorthand technique to organize the workload? Is it a protective measure against emotional burnout for healthcare providers to deal with an illness as opposed to a sick human being?

I’m not sure. But I would never want a loved one to be called “screaming lady” in any setting, including a private work room.  I wouldn’t want the professionals making decisions about their medical care to de-humanize them in that manner.

Part of the modern Hippocratic Oath states: “I will remember that there is art to medicine as well as science, and that warmth, sympathy, and understanding may outweigh the surgeon’s knife or the chemist’s drug.”

I was fortunate to have an attending doctor model an approach that helped me correct unprofessional and potentially harmful behavior that deviated from the oath I took. It is our hope that sharing this experience will inspire change in other healthcare professionals who may have fallen into similar habits

Samuel A. Schueler received his BS from Cornell University and his MD from SUNY Upstate Medical University. He is now a chief medical resident at Boston University School of Medicine.

Robert C.  Lowe is an Associate Professor of Medicine at the Boston University School of Medicine and a gastroenterologist at Boston Medical Center.  He has been teaching medical students, residents, and fellows for more than 20 years in both classroom and clinical settings.

Elia E. Acevedo-Diaz received her BS in biological sciences and MD from the University of Puerto Rico. She is currently a psychiatry resident physician at Boston Medical Center.