“The soul’s ability to nourish itself lies in the heart.”

This quote by Aristotle now lives on a painted wall in the Coronary Care Waiting Room at Bellevue Hospital, thanks to members of NYU School of Medicine’s class of 2019 who took part in a project to help transform spaces at the New York City hospital. 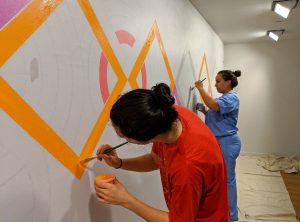 Students create a mural on the walls of the of the Coronary Care Waiting Room.

Over two weekends in April, students from the Gold Humanism Honor Society (GHHS) converted a plain space in the Coronary Care Unit Family Waiting Room (10 North 17) into an oasis of healing through their painting.

The students painted artwork designed by muralist Rick Jordan, who also supervised the students in executing it.

“We start off by identifying a space in Bellevue Hospital that serves a vulnerable population, such as families of patients coping with end-of-life issues or severe heart disease,” said Dr. Michael Tanner, associate professor in the Department of Medicine, who co-advises the NYU GHHS chapter along with Katie Grogan. “The goal was to create a soothing and mellow space for the family members of patients.”

This is the second mural project by the NYU GHHS chapter. Last year, GHHS student members painted a mural and revamped the Palliative Care Family Waiting Room (17 South 39) at Bellevue, which is now called “Serenity Space.” 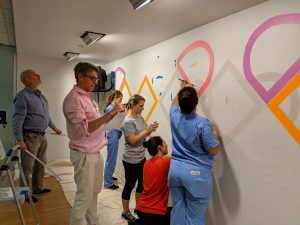 Like last year, the new mural in the Coronary Care Unit Family features a serene design and an inspirational quote printed in Spanish, English, and Chinese, which was translated by Bellevue Language Services.

“We all vote on an uplifting quotation,” explained Dr. Tanner. “There were three choices this year, but hope is the feeling we were all going for, and the quote chosen reflects that.”

“It will be nice for patients’ families to come into the waiting room, look up, and find these words of encouragement,” said Melissa Velasquez, a NYU medical student and GHHS member. “I think it would be very comforting to families to be in a room like this. It’s also amazing to see how much work, detail, and thought process that goes into it.” 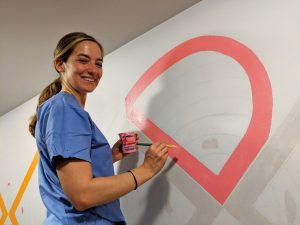 To come up with the mural’s creative concept, Jordan goes into a dark room for 72 hours and emerges with a design based on the works of a twentieth-century artist. This year’s mural is inspired by the paintings of American artists Frank Stella and Robert Mangold.

Stella’s colorful geometric Protractor Series from the late 1960s and 1970s became the touchstone for creating graphic evocations of the heart shape, while a reference to Mangold’s 1990s Column series offered the sense of kinetic movement, similar to that of a beating heart. To finish off the project, the chairs in the waiting room will be refurbished in colors that match the mural. 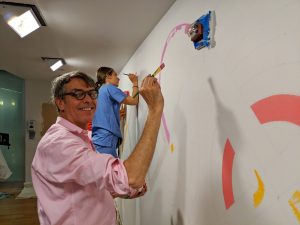 Muralist Rick Jordan helps the team get started on his design, which drew inspiration from paintings by American artists Frank Stella and Robert Mangold.

“It sounds like a lot of work, but because everyone cooperates so well, there are no obstacles, therefore no frustration, and it feels effortless,” said Dr. Tanner. “I think the finished product is beautiful, inspiring, and consoling. We’re all pleased that this turned out just as well as last year’s project.”

“I’m grateful that I could participate in this project,” said Kyra Edson, an NYU medical student and GHHS member. “The mural makes this waiting room a pleasant space for patients’ families to be in when they’re going through some of the most difficult times in their lives, a space where you can reflect and relax.” 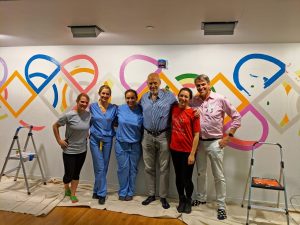 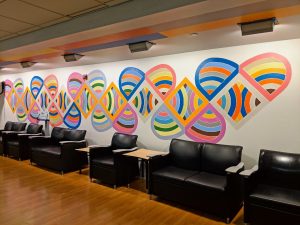 “Students are nominated for the GHHS by their classmates as role models and exemplars of compassionate patient care and selected by a review committee of faculty and administrators,” explained Ms. Grogan. Sixteen NYU medical students were inducted into the NYU GHHS chapter in fall 2018.

In addition to the mural, the group produced Six-Word Stories, a book of brief reflections by their peers in the class of 2019. The book collected defining moments or aspects of their time as NYU medical students to share with their school community.

“The reason we’re doing this is to show that we care and can really empathize with families and what they’re going through, and we want to make that a little bit less painful,” said Meredith Horton, GHHS member. “The quote is succinct yet holds two meanings that show there’s more to medicine than the physical. There’s a lot of love and dedication that went into painting this mural.”