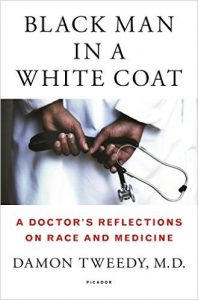 A friend of mine once told me about a time he was acutely aware of his race during one of his third-year clerkships in medical school. He was standing in one of the emergency room bays, researching a condition he thought one of his patients might have had. An ER nurse approached him, and asked whether he was part of the janitorial staff they had just requested. It was the third time this had happened to him over the last few weeks. “I was wearing scrubs and my white coat every time,” he said to me, “but I was wearing black skin too, and people always seemed to see that first.”

His story is one of several examples of discrimination in the medical profession. There is ample evidence that my friend is not alone in his experience. There have been both qualitative and quantitative lines of evidence that aspects of racism are part of the hidden curriculum, and may even increase implicit bias in medical students.

Recently, the New York Times published a piece about Dr. Tamika Cross, a black female physician who was denied the ability to help a patient on a Delta flight because the flight staff did not believe she looked like a doctor. Her experience led to the popularization of #whatadoctorlookslike, a hashtag where black women physicians took to social media to combat the stereotype that led to Dr. Cross’s experience.

Most of us agree that discrimination on the basis of race or gender is unacceptable in our society. As our colleagues continue to tell of us of instances in which they experience discrimination today, and as we continue to amass evidence that supports these claims, we have to ask ourselves what we can do to strive for equality. One physician, Dr. Damon Tweedy, has been using narrative in order to do just that. His book, Black Man in a White Coat, has received numerous awards and appears on the New York Times Bestseller list. In the book, he explores his experiences with race and medicine during his medical training.

In an interview with the Gold Foundation, Dr. Tweedy related how his journey into literature began when he started enjoying the writing of physician-authors during medical school. He noticed that there was very little discussion about race in these writings, which had played a big role in his life. “Certain voices weren’t captured well in the humanistic stories about medicine,” Dr. Tweedy recounted, “I realized I could contribute to those narratives.”

His nuanced account of both his own and his patient’s stories is supplemented by the self-reflection that he does throughout the book. He discussed the importance of including his own reactions to the events he relates. “Acknowledging my own limitations and challenges opens up the reality of the situation, of how what goes on in our minds can impact the care that people receive.” Dr. Tweedy uses these narratives to discuss how we connect with groups of people and with individuals in medicine: how we try to understand our communities without losing sight of the individual in front of us.

This underlying core element of humanism is central to Dr. Tweedy’s work. “I really wanted people to engage in personal stories and come to their own conclusions. There are false narratives in our society that reduce individual experiences, and those aren’t helpful to us. Sometimes even when the patient and I were both African-American, we still had misperceptions. That’s where humanism comes in.” Dr. Tweedy uses humanism as a tool to help people think about these complex issues, and how they relate to the greater goal of social equality.

These stories are important because they illustrate to us the necessity of advocating for racial and gender equality in medicine. Other groups that have also joined this chorus of voices, such as those attempting to reform medical education, have been influential at the institutional level. At the organizational level, the WhiteCoats4BlackLives movement formed at many medical schools across the country as a social justice platform for student physicians. As public health researchers continue to document and create strategies for addressing health disparities, it is important for clinicians to continue paying attention to the contexts from which our patients come to seek aid. Attempting to engage in their stories is an excellent way to promote humanism – both for our patients and for ourselves.