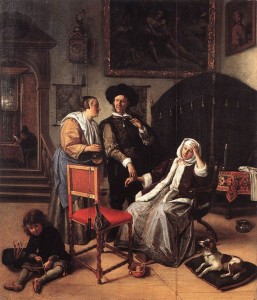 “Patient-centered care” is one of the most frequent buzzwords in medicine right now. The idea is to focus on what’s best for each individual patient rather than on what’s easiest for the doctor to do or what’s best for “most people.” Doctors are advised to work with the patient and to take factors like religion and socioeconomic status into consideration when selecting tests or treatments.

Because it is so hard to see the effects of cultural factors (race, religion, gender etc) on clinical encounters in our own lives, it can be immensely powerful to look to the past for examples that can enlighten our current views.

In the 1600s there was a different kind of patient-centered care.  Back then, doctors did not have a great deal more knowledge about medicine than ordinary men and women. Physical signs like pulse and body temperature were not yet used to assess health. Instead, doctors relied on subjective information provided directly from patients: their descriptions of symptoms, accounts of past ailments, and explanations of how they got sick. Patients’ words and beliefs – not just their bodies — determined their medical care.

Because patients’ views were so central to healing, cultural factors that colored patients’ perceptions of themselves were critical to clinical encounters. Gender was one key factor that shaped people’s interactions with doctors and the nature of their care.

Most people in the 1600s, for instance, believed that emotions could cause illness. Colds and fevers were believed to have been brought on by experiences of grief, surprise, and fear. Men and women, however, perceived the phenomenon differently.  Many women from the period described falling ill immediately and intensely in response to emotional upheaval, as though there was an instant link between emotional distress and physical breakdown. Men described a much slower, mediated process where emotions caused physical shifts such as loss of appetite and fatigue, which in turn led to ill health.

These distinctions may seem subtle, but these gender differences could determine which treatments doctors prescribed. For example a woman named Frances Wilkins suffered from “mellencholey” for 6 months. Her doctor’s casebook explains that her illness was linked to a sudden fright. One of her symptoms was pain in her left side that moved around “like live things.”

It was most likely Wilkins herself who linked melancholy to a fright, as well as Wilkins who compared the subsequent pain to a scurrying creature. These characterizations led the doctor to prescribe purging drinks. Had Wilkins been a man, she might have been treated solely for pain, or she might have attributed the onset of illness to something less emasculating than a sudden scare.

Today gender continues to shape patients’ self-perceptions about what is considered “normal” for their own bodies. It can also contribute to the stigma of particular diagnoses, such as mental illness.  Gender also shapes clinical relationships — how patients interact with medical authorities (most especially those of the opposite sex) and how healthcare workers, in turn, behave toward patients.

Though we may not always see how much gender influences present-day medical care, historical models show how much gender matters when the views and voices of patients are crucial to care. Because men and women viewed their bodies differently, they collaborated with doctors to come up with a corresponding diagnosis and treatment plan. By looking to the past we can see how cultural factors like gender have been integral to patient-centered care all along.

Olivia Weisser, Ph.D. is Assistant Professor of History at the University of Massachusetts Boston. Her first book explores the history of medicine from the patient’s perspective: Ill Composed: Sickness, Gender, and Belief in Early Modern England (Yale University Press, 2015). Follow her on Twitter @OliviaWeisser.