Dr. Howard Grill, a cardiologist from Greensburg, Pennsylvania, has been photographing and interviewing patients to share their stories and help bring doctors and patients closer together. The series of portraits and audio has become The Empathy Collection, which is on display on his website and in the lobbies of two sites of Excela Health.

Excela Square at Latrobe is an outpatient facility affiliated with Excela Latrobe Hospital. The Empathy Collection is exhibited there with beautiful black and white photographs of several of Dr. Grill’s patients, with buttons below each portrait that can be pressed for a recording of the patient sharing a bit of his or her life story. The Excela Latrobe Hospital was honored by the Gold Foundation in 2018 with the ACGME and Gold Foundation DeWitt (Bud) C. Baldwin, Jr. Award. The annual award, which was given to just two hospitals in the nation in 2018, recognizes health institutions that are exceptional at fostering a respectful and humanistic environment for resident physicians and throughout the hospital system. Read more about the 2018 Bud Baldwin Award.

How did this project begin? 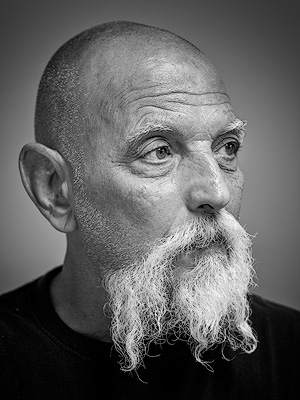 About 8 years ago, I had a patient who had been a blister gunner on a bomber in WWII. A blister gunner was the person who sat in the clear bubble under the bomber’s wings with a machine gun. This particular man was also an artist and had been chosen to design and paint the insignia on the side of the bomber. When he discovered that I had a strong interest in fine art photography, we developed a friendship and he brought in his original drawings of the insignia and told me stories about his time in WWII.

He enjoyed talking to me about his time during the war so much that at one point I asked him if he would allow me to record his stories and perhaps take his picture. I was worried that he would say no, but, in fact, he was pleased with the idea!

I ended up scheduling him for a 45-minute appointment (back then you could do that) so that we would have the time we needed after his clinical visit.  I was very intrigued with the resulting photographs and audio, and in the back of my mind I thought that it would make an interesting project. But it remained in the back of my mind until I changed jobs and joined a healthcare system that was a bit more community focused.

By the time I decided to restart the project, medicine had changed quite a bit and I was a hospital-employed physician. For that reason, I had to get permission from the hospital administration to ask patients if I could record and photograph them. I was pleasantly surprised when they thought that the project was a really good idea and allowed me to move ahead with it.

Why do you believe it is so important to hear the patient’s story? 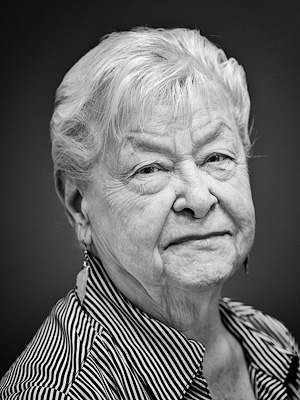 I don’t think I have to tell you that medicine has changed over the last several years, the result being that physicians have less time available to spend with their patients. I believe the doctor-patient relationship has suffered because of this and that there are fewer and fewer doctors that truly know their patients as “people” with the same ups and downs, life experiences, and “stories” as we doctors have.

That’s really too bad because I think that one of the joys of being any type of healthcare professional is to know the people that you care for in a way that goes beyond what disease they have. Plus, I think that once that type of more personal relationship is established, the medical aspect of the relationship improves as well.  Patients are then more apt to trust their doctor and better express both their symptoms and the concerns that they have regarding their condition. That makes it that much easier to provide quality care and to address and allay patients’ fears and concerns.

What is your hope for presenting this art, for those who see your photos and hear the patient’s stories?

When I started the project, my goal was to bring doctors and patients closer by having them realize that they are very much the same — people with interesting life stories with the same fears and hopes even though they might be “sitting on opposite sides of the exam table.” The more I started to think about it, though, the more I thought that there may be more to it than that. After all, I think the more everyone realizes that we really all are more the same than we are different the better off we all will be.

Is there anything in particular you’ve been struck by, or have you had new insights as this project has evolved?

When I first started the project it was a bit difficult for me to ask patients if they would let me make a portrait of them and record their story. This was because I thought there would be hesitancy on their part and I didn’t want them to feel obligated to say yes. When I ask, I always explain to them that participation is totally and completely voluntary. I was quite surprised at how willing most people have been to participate in this project! At one point, I somehow forgot to put a memory card in my camera and didn’t recognize it until I had already asked the patient if I could photograph them. When I explained that I couldn’t take their photo, they actually volunteered to come back on their own time in order to participate. So I guess the answer is that I have been struck by how eager people are to tell their story and be recognized as more than just “a patient.”

Their eagerness was evident at the openings of the new outpatient facilities the hospital system I work for has built. In the lobbies of each of the facilities we hung five portraits with “sound bars,” so that people can listen to the audio. In each instance, we have invited the patients who are featured in the photos to participate in the opening. It has really been wonderful to see how proud and happy they are as others listen to their stories.

Has this changed the way you practice medicine at all?

I would say that it has made me more “tuned in” to my patients and perhaps more encouraging to them when it comes to expressing their health concerns. It has definitely increased my enjoyment of the practice of medicine.

What are your future plans for the project?

I would love to see other medical systems utilize the project in their training of medical professionals. In addition, it would be wonderful if other medical institutions were also able to use the portraits and audio as part of the décor for their medical facilities. There has been great interest with excellent patient and visitor feedback to the public art displays with audio available in the lobbies of our outpatient facilities. It has also generated a great deal of positive feeling within the local community.

Any group or hospital system can email me if they have an interest in or ideas about how to utilize the project. See and hear the entire project to date

What advice would you give new medical students about connecting with patients?

Introduce yourself to your patient respectfully and treat him or her with respect. When you ask a question, give the patient time to tell you what they want to say and don’t just hear — listen.

Ask them what their concerns are. They might not share their concerns with you unless they know that you want to know. Try to take some time to learn about your patients as people.

Enjoy the time with your patients; it’s one of the best aspects of working in healthcare.