”My mother died last week,” read the e-mail from Mr. Green, a man I’d never met. ”I know my parents appreciated the medical care you provided for them over many years and that my father would enjoy hearing from you.”

I found myself translating what I thought to be the bereaved son’s true feelings into less polite terms: For some strange reason Mom and Dad thought you were a good doctor, but I can’t imagine why, considering that you disappeared when they needed you most.

Or were these my own thoughts? Were the hostility and accusation I sensed in this message merely a projection of my own guilt?

I liked Sid and Ellen Green* the moment I met them, twenty years ago. They reminded me a little of my parents–not in their personalities or looks, but because of their New York accents. After my parents died, every time I saw Sid or Ellen I felt a flush of affection and grief. If only Mom and Dad had been a few years younger–Sid’s and Ellen’s ages–they’d still be alive and I’d still be hearing their voices. Our daw-tah is a doctah in Baw-ston.

I’d have to consult my records to list the various medical problems, hospitalizations, and procedures the Greens experienced with increasing frequency as they aged. But I have no trouble remembering the moment Sid told me he was finally (in his seventies) ready to retire. Or Ellen’s description of the surprise birthday party Sid and their kids threw for her. They really got me this time! They really, really got me!

I recall when Sid first told me that Ellen seemed out of breath when climbing the short flight of stairs in their condo. He mentioned this during one of his visits. She’ll never tell you, but I’m telling you.

I also remember the first time the Greens sat in my exam room together. They’d always made separate appointments, sometimes in back to back slots in my schedule. But as Ellen became sicker, Sid stopped making appointments for himself. You could say that, like many caregivers, he was neglecting his own health. But when I saw them side by side–Ellen in a gown, Sid with her purse on his lap–I felt that Sid’s health had become inseparable from Ellen’s; that her heart disease was his, too.

Over the next few months, I saw less of the Greens. They were occupied with cardiologists, cardiac surgeons. Sometimes Sid would call to ask my opinion of this intervention, that new drug. Really he was calling to ask: Is there any hope? Any hope at all?

One day Sid phoned from a hospital near their home. Ellen had collapsed and was taken there by ambulance. Now she was in a coma in the CCU. The kids were on their way. I offered to speak with Ellen’s doctors at the other hospital. I offered Sid my cell phone number and told him to call me any time. I offered my sympathy and my love.

And then I became distracted by home and work and I forgot to remember Sid and Ellen for a few days.

Years ago, when I was just weeks out of residency, I was on call for my internal medicine practice when a doctor in the emergency room paged me. A man who was not yet a patient of our practice, but had intended to be, was in the ER, acutely ill. After hanging up, I called the older colleague who had been assigned to provide back up as I made my maiden weekend voyage on call. It was late on a Sunday night, and I had little interest in getting out of bed and driving downtown. “I don’t really know this patient,” I told my mentor. “Can I wait until first thing in the morning?” He said that technically, no, I didn’t need to rush to the hospital. “On the other hand,” he said, “there’s a lot to be said for showing up at the right moment.” I got dressed. I drove downtown. A quarter-century later that patient is still with me, and still recalls the Sunday night I was by his side.

I was not by Ellen’s side when she died. I also missed her funeral which, Sid told me when I visited him at home a few days later, was well attended. You wouldn’t believe how many people came!

Doctor -patient relationships, like all relationships, are sustained by moments of connection. I’d shared many such moments with the Greens, but had missed this one. My lapse didn’t make me a bad doctor or a bad person, but, there was no getting around it: the moment had passed.

Or was that a voice in my own head, speaking in a New York accent?

Suzanne Koven MD is a primary care internist and writer.  In addition to her regular columns in The Boston Globe and The Rumpus, her work has been featured on NPR, The New Yorker, The Daily Beast, The Huffington Post and KevinMD.com.  You can follow her on Twitter at @SuzanneKovenMD.

Part 1 of Alda-Gold webinar | We’re in this together: The Power of Connecting to Care in a Crisis

Watch Part I of “We’re in this together: The Power of Connecting to Care in a Crisis,” a Gold Human InSight Webinar series with the Alda Center, taped with a live audience on May 27, 2020, chevron_right Watch

#FrontLineFaces: A call for human connections in this pandemic

Amid this life-altering pandemic, with physical distancing a necessity and the challenges to our healthcare teams and society rising by the minute, one thing is clear: human connections are more … chevron_right Read more 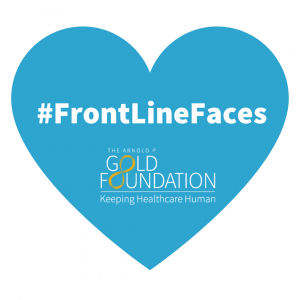 Dr. Mick Krasner, co-founder of Mindful Practice, presented a free hour-long webinar on March 4, 2020, as an introduction to “Flourishing at Work: Mindful Practice for Clinicians and Leaders.” chevron_right Watch