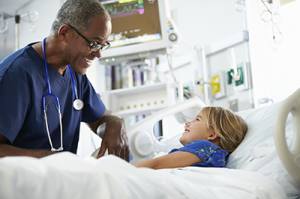 At the end of every month, The Arnold P. Gold Foundation compiles the Research Roundup, a list of recently published studies on humanism in medicine.  If you would like to be notified each time these are published, send an email to bking@gold-foundation.org with the subject line “Subscribe RR”.

Burnout, compassion fatigue, compassion satisfaction, and secondary traumatic stress in trauma nurses
Hinderer KA, VonRueden KT, et al.    J Trauma Nurs. 2014 Jul-Aug;21(4):160-9. In a sample of 128 trauma nurses, researchers found that 35% were suffering from burnout, 27% from compassion fatigue and 7% from secondary traumatic stress. These nurses were more likely to have negative coworker relationships, to use medicinals, and to work more hours per shift. Nurses who had high compassion satisfaction scores were more likely to have strong support, to exercise, to meditate, and to have positive coworker relationships.

Nursing presence: Putting the art of nursing back into hospital orientation
Kostovich CT, Clementi PS.    J Nurses Prof Dev. 2014 Mar-Apr;30(2):70-5. Loyola University Health System implemented a patient-centered model of care in new units of its hospital. They also added a one-day training to the general nursing orientation to address communication, attentive body language, honesty, listening skills, empathy, concern and respect for patients.  After 1 year of this new model, data showed that patient satisfaction scores increased and the incidence of falls and pressure ulcers were much lower.

This post was written by Brandy King, MLIS  – Head of Information Services at The Arnold P. Gold Foundation Research Institute.