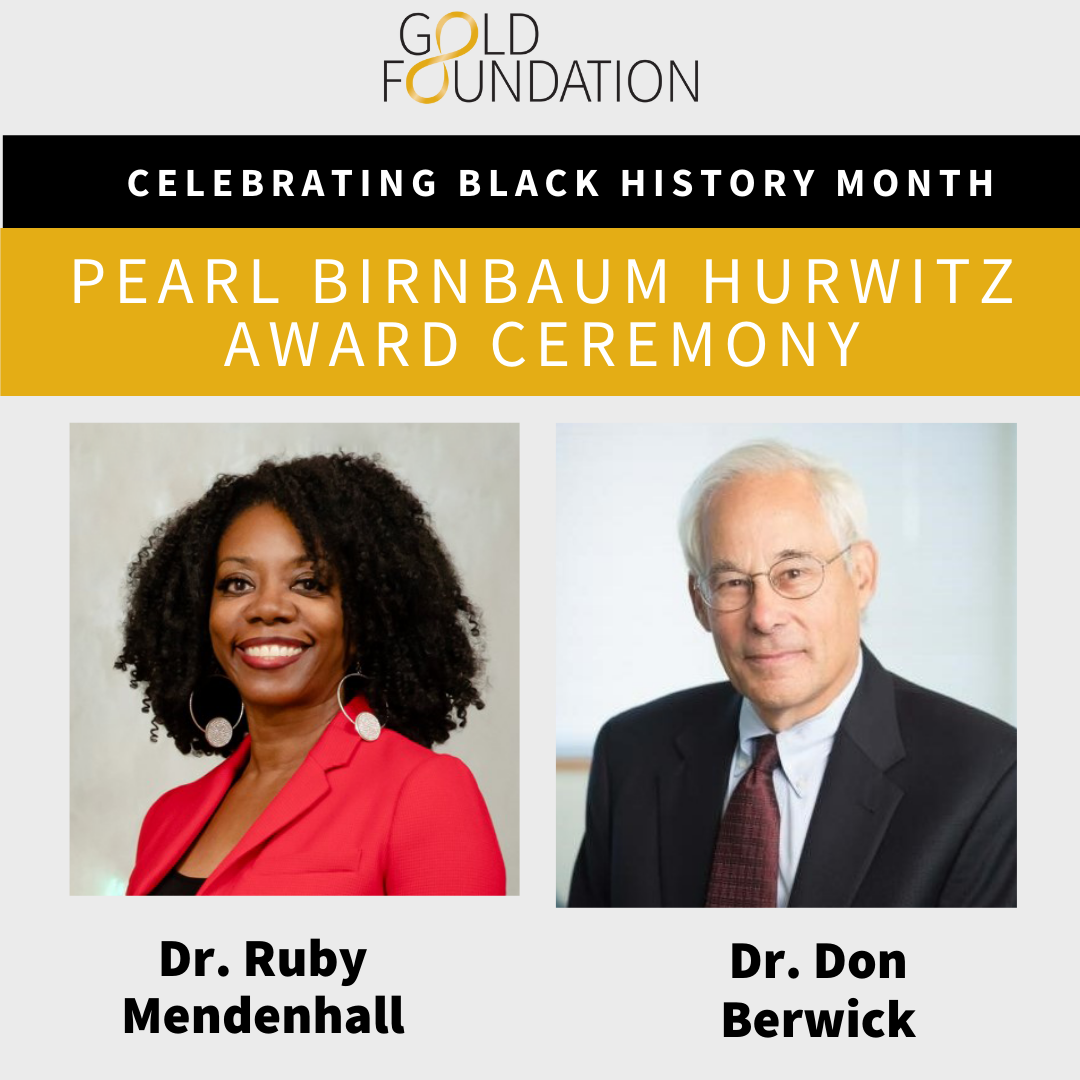 Thank you for joining us at our special virtual celebration of Dr. Ruby Mendenhall, the 2021 recipient of the Pearl Birnbaum Hurwitz Humanism in Healthcare Award, that was held on Monday, Feb. 28. Gold President and CEO Dr. Richard I. Levin presented Dr. Mendenhall her award, which was then followed by a conversation with Dr. Don Berwick, and a live Q&A with Dr. Mendenhall and the audience. A video recording of the event will be made available soon.

Dr. Ruby Mendenhall is a visionary leader and interdisciplinary researcher who has galvanized students, faculty, community groups, and citizen scientists to advance the shared quest for a more equitable, healthy and just world for all. Dr. Mendenhall, MPP, PhD, is the Kathryn Lee Baynes Dallenbach Professor in Liberal Arts and Sciences at the University of Illinois at Urbana-Champaign and Associate Dean for Diversity and Democratization of Health Innovation at the Carle Illinois College of Medicine. She is on the leadership team of the Carle Illinois College of Medicine’s Health Maker Lab, an initiative to spark innovative solutions to health disparities. The annual Health Make-A-Thon competition encourages innovators to pitch their ideas on improving health to a “Dolphin Tank” of judges – friendlier than a “Shark Tank” – and compete for $10,000 in resources to create a prototype. She is also the Co-Director of STEM Illinois and the Director of the medical school’s new Health Maker Lab node. She has published extensively, including on the medicalization of poverty, genomics, depression, stress, resiliency, and the design of spaces of hope. Her research has been supported by the Ford Foundation, the City of Chicago Office of the Mayor, the National Science Foundation, and the MacArthur Foundation.

Dr. Donald M. Berwick is one of the leading scholars, teachers, and advocates in the world for the continual improvement of health care systems. He is a pediatrician, and a longstanding member of the faculty of Harvard Medical School. Dr. Berwick founded and led the Institute for Healthcare Improvement, now the leading global nonprofit organization in its field. He was appointed by President Obama as administrator of the Centers for Medicare and Medicaid Services, where he served in 2010 and 2011. Dr. Berwick has counseled governments, clinical leaders, and executives in dozens of nations. He is an elected Member of the National Academy of Medicine and the American Philosophical Society. Dr. Berwick is a member of the Gold Humanism Honor Society and gave the 2017 Jordan J. Cohen Humanism in Medicine Lecture at the AAMC. He has received numerous awards, including the Heinz Award for Public Policy, the Award of Honor of the American Hospital Association, and the Gustav Leinhard Award from the Institute of Medicine. For his work with the British National Health Service, in 2005 Her Majesty Queen Elizabeth II appointed him Honourary Knight Commander of the British Empire, the highest honor awarded by the UK to a non-British subject.

The Pearl Birnbaum Hurwitz Humanism in Healthcare Award is presented annually to a woman who exemplifies humanism and has advanced, through her scholarship, advocacy, leadership or work, the well-being of underserved populations in the healthcare arena.

This honor was established in 2014 through a generous gift from Dr. Ronald Arky, Daniel D. Federman Professor of Medicine and Medical Education at the Harvard Medical School. The award is named in memory of Pearl Birnbaum Hurwitz (1907-1993) , a leader in the movement to provide services and support for children with disabilities and their families and the founding President of the Arc of Massachusetts.