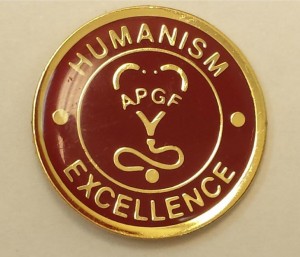 Today, The Arnold P. Gold Foundation (APGF) and the American Association of Colleges of Nursing (AACN) announced that 100 schools of nursing were selected to receive funding support to pilot White Coat Ceremonies, which are designed to instill a commitment to providing compassionate care among future health professionals. Funded by APGF Trustee Elaine Adler and her husband Mike, Co-Founders of the Adler Aphasia Center, this ground-breaking program was developed to promote humanistic, patient-centered care among incoming nursing students this fall.

“As The Arnold P. Gold Foundation broadens its mission to engage the entire healthcare team, we are pleased to partner with the AACN to pilot the White Coat Ceremony for nursing students,” stated Dr. Richard Levin, President and CEO, “Creating a new link between nurses and physicians through humanism supports optimal health care in the 21st century. We are thankful for the support of Elaine and Mike Adler in this partnership project.”

Though White Coat Ceremonies have been an important rite of passage at medical schools for more than 20 years, this new collaboration between APGF and AACN marks the first time a coordinated effort has been developed to offer similar events at schools of nursing. In this pilot year, nursing schools in 43 states plus the District of Columbia were provided financial support and guidance to offer a White Coat Ceremony, which will consist of the recitation of an oath, cloaking of students in a white coat, an address by an eminent role model, and a reception for students and invited guests. Students also will receive a specially designed pin that will serve as a visual reminder of their oath and commitment to providing high quality care.

“By offering White Coat Ceremonies, our schools are sending a clear message to new nursing students that compassionate care must be a hallmark of their clinical practice,” said AACN President Eileen T. Breslin. “Securing a commitment to providing patient-centered care at the beginning of a nurse’s professional formation will help to raise the quality of care available to all patients.”

In 2014, 100 nursing schools were selected to receive funding support to pilot White Coat Ceremonies and in 2015, 60 nursing schools were selected. The Arnold P. Gold Foundation and AACN hope to continue supporting inaugural White Coat Ceremonies at additional nursing schools in 2016. For further updates check the website in early summer 2016. For more information about this program, contact Sharrie McIntosh, Senior Vice President and Chief Program Officer, at smcintosh@gold-foundation.org or 201-567-7999.