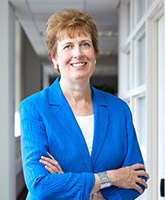 To keep pace with the changing healthcare landscape, the Foundation has expanded its outreach to include the entire healthcare team in the Gold Community of Caring. To help facilitate that expansion we are pleased to announce the appointment of Dr. Eileen M. Sullivan-Marx, Dean of the New York University Rory Meyers College of Nursing and the Erline Perkin McGriff Professor of Nursing, to our Board of Trustees. Commenting on her appointment, Richard C. Sheerr, Chairman of the Board, said “Dr. Sullivan-Marx is a leading advocate, educator and clinician in the field of nursing.  We are privileged to have her guidance as the Foundation moves to implement its new strategic plan.”

Eileen Sullivan-Marx, PhD, RN, FAAN became Dean of New York University Rory Meyers College of Nursing in 2012. Dr. Sullivan-Marx is known for research and innovative approaches in primary care and testing methods of payment for nurses particularly with Medicaid and Medicare. She previously served as Chair of the Pennsylvania Commission on Senior Care Services in 2008 and was a member of the Philadelphia Emergency Preparation Review Commission in 2006. In addition, Dr. Sullivan-Marx was a Senior Advisor to the Center for Medicare & Medicaid Services where she advocated for new policies that led to the passage of the PACE Innovation Act in 2015. She is a graduate of the University of Pennsylvania School of Nursing, where she obtained her BSN and Ph.D in Gerontology, and the University of Rochester School of Nursing, where she received her MS.